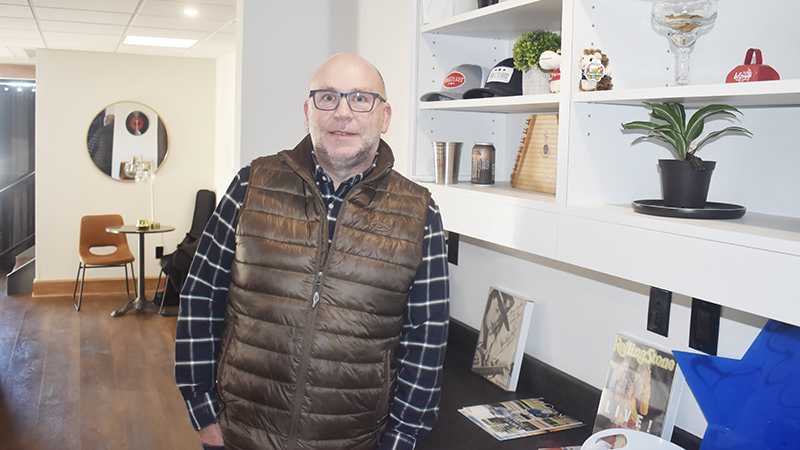 Sweetland has a new general manager. Brent Gibbs has taken over after the departure of former GM Katie McGinty earlier this year.

Originally from outside Nashville, Tennessee, Gibbs brings a background in music and music touring, having represented artists and high-profile talent, typically on the road, throughout his career.

He began working part-time, three days per week in November, due to commitments in Tennessee and started full-time the first week in December.

Gibbs said he was drawn to LaGrange because of the city’s pace, small-town feel and sense of community.

“My wife and I really became aware while living in Nashville that we were smaller-town, small-town souls. So, the opportunity to come to LaGrange was super attractive because we love people, and we love to know people.”

He added that getting pulled away from home while representing artists on tour had become less than ideal for trying to be a good husband and father.

Gibbs doesn’t appear to be planning any drastic changes for Sweetland.

“The folks that came before me really laid a great foundation for me to come in and be creative,” Gibbs said.  “I sort of look at Sweetland like a small business. It’s municipally owned, of course, so it’s a community benefit or a community attraction, but you have to satisfy the demands of profit and loss in a way that becomes urgent.”

“I think a more nuanced approach to artist selection is something I think reimagining the ways that Sweetland can be used to produce entertainment in ways that aren’t just concert programming, so whether that’s different styles of events or festivals or corporate involvement.”

Gibbs said the success of an event at Sweetland is often not referring to money, noting that the recent Ron White performance was a good example.

“It turned out to be a successful thing. When I say successful, more often than not, we’re not referring to money. I’m referring to community satisfaction and the amount of butts in seats because that’s an indicator of how as a municipally-owned facility, how well we’re making things attractive to the community.”

“The finances are not necessarily the primary focus of what determines the success or failure, but Sweetland needs to stand on its own two legs so it’s supported,” Gibbs said. “It’s owned by the city, so I take very seriously my obligation to steward the city’s funds wisely.”

Sweetland is planning a wide variety of events in the future. Gibbs said he is taking his role as a civil servant seriously.

“I think what you’re going to see is a diversity of programming, but it has to have a goal in mind. The goal is actually not diversity. The goal is unity,” Gibbs said. “We have a non-political way to bring lots of varied people groups together, to engage in personal interactions and personal relationships and friendships and community.”

“I’m excited for what we can do to serve people and encourage the spirit of unity,” Gibbs said.

The team at Sweetland is still working to finalize next year’s concert series, but details should be coming within the next couple of months. Nix said information on the upcoming events lined up for Sweetland next year should begin being released in mid to late February.