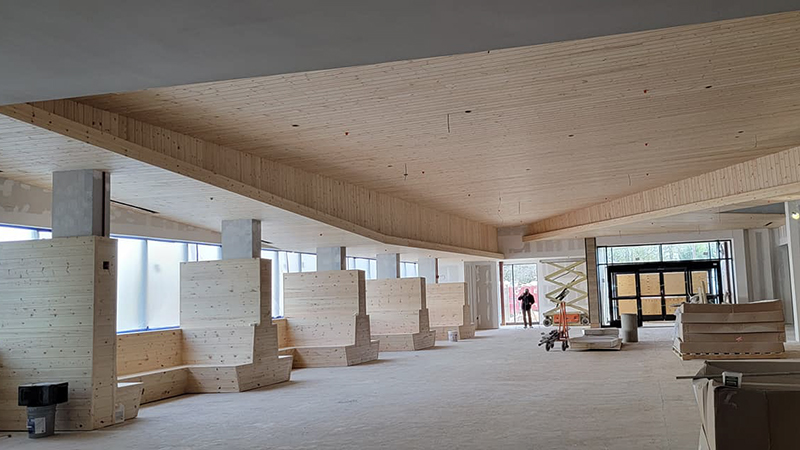 Schuermann said that they have funds to complete substantial construction for the project, which is expected to be completed in March.

“We have enough funds on hand to make that happen, which is good. Where we’re falling short in terms of our project budget development is furniture, fixtures and equipment,” Schuermann said.

Originally the interior items were budgeted at $797,000, which includes all furniture, glass walls, shelving units and equipment needed for the library. Schuermann said when bids were returned the total cost was closer to $1 million dollars.

“We did our due diligence, value engineered throughout each and every item there and whittled that down to a number that’s manageable but still our project budget development is a little bit short,” Schuermann said.

Schuermann said they have raised about $200,000 through their capital fundraising campaign, but they currently need an additional $620,000 to complete the project.

He said their capital campaign didn’t raise quite what they anticipated.

“We reached out to Chick-fil-A True Inspiration Award, Diverse Power and a lot of different foundational entities. Some of the feedback we’re getting is that this is viewed as a government project and the optics aren’t as strong as helping other folks in greater need that don’t have governmental support,” Schuermann said.

Schuermann said after the fundraising campaign fell short, he was asked by the library board to ask the county and other government entities to consider additional support. The City of LaGrange and Callaway Foundation were also sent letters asking for additional funding.

The Callaway Foundation has expressed that they would approve additional funding for the project, contingent on the city and county providing equal support, according to Schuermann.

“If we are to have that money, at this point in time, then we’ll be looking at opening in late summer of next year,” Schuermann said. “The good news is we have enough to complete construction. It’s going to be a very empty building though once we are done.”