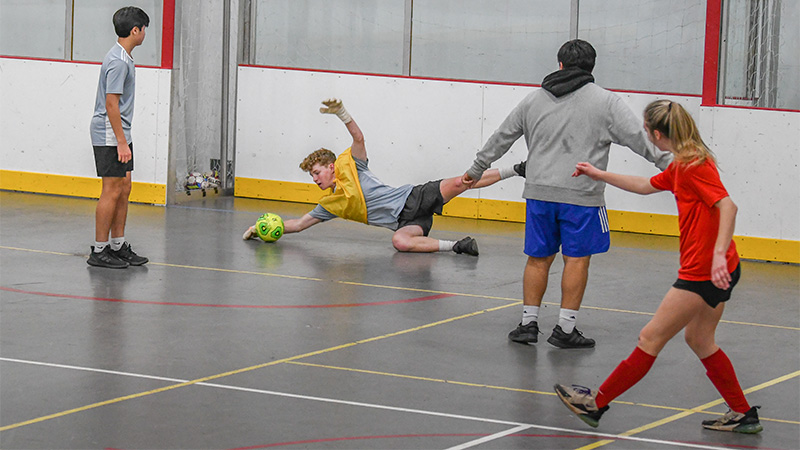 A local indoor soccer tournament kicked off over the weekend at the Mike Daniel Rec Center and came roaring back on Wednesday as teams from Callaway, LaGrange and beyond came to test their skills and prepare for the upcoming seasons.

Callaway had multiple teams in the tournament, including some from its boys and girls teams — both teams set a season high in wins in the 2022 season and will be looking to build on that success going into the 2023 season.

The boys team will be fielding some fresh talent from the new Callaway Middle School team as well as some players who played club soccer.

For the girls, it will be a lot of the same girls from a season ago. Assistant coach Jeff McGuffin sees Autumn Brown as a potential breakout star for the Cavaliers this season as she has developed with a club team in the offseason.

The Cavaliers have a training camp on Jan. 4 with the season starting in just over a month’s time.

LaGrange boys will be sporting a new backline next season as the roster is set for a bit of a turnover after losing a bundle of seniors to graduation earlier this year. The Grangers brought some of their heavy hitters and players like Cade Hollstrom and Davis Knight have developed. With an expanded coaching staff now numbering five in total, the Grangers also look to deploy a quality JV team this year who also fielded a team at the tournament. One of those younger players that might bypass the JV team is Luis Morales, who has flashed immense potential.

The Grangers start practice on Jan. 9.

Teams also consisted of teams from the local Sunday league teams — a group of guys that have recently graduated high school or do not play for the schools, but are active in the local soccer community. They showed up in numbers to support, cheer and goad their friends on the other teams and when they got their chance on the court, they shined.

Valley sent up its heavyweight UMA FC team and they were ruthless and clinical on the court. Jo Howoon’s side came up with a purpose and delivered.

The tournament will resume with a single game on Thursday between Callaway and UMA FC at 4:30 before returning for a full slate of games on Friday starting at 6 p.m.