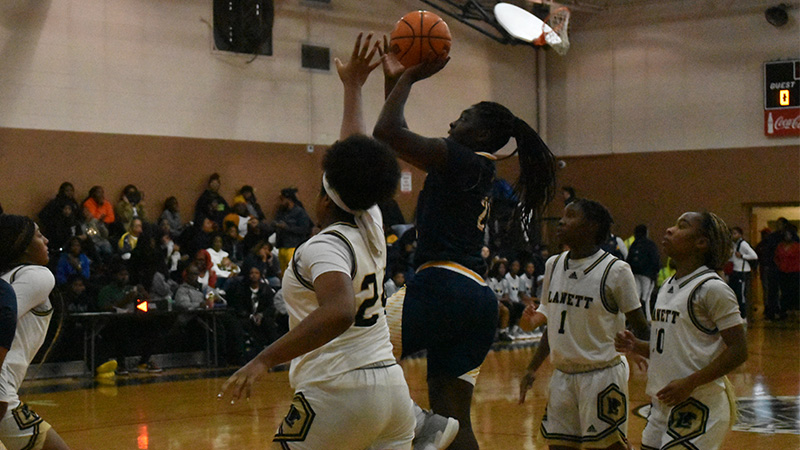 The Lanett girls only had two days to prepare for a tough Georgia opponent in Troup, but it was no issue as the Lady Panthers’ defense stifled the Tigers in Lanett’s 37-29 win on Thursday.

Lanett head coach Charlie Williams was proud of the effort his girls showed.

“If we play hard, we’re going to be in every ball game we play.”

The Lady Panthers were able to slow down Troup’s Alexcia Murphy, who has been averaging 20.8 points per game.

“It was team defense,” Williams said.

“They jumped to the basketball. They were alert.”

The Lady Panthers got off to a hot start as they took a 9-0 lead early in the first quarter.

It took Troup four minutes to score, and the Tigers were able to close the lead.

Lanett went up 11-6 at the end of the first quarter but would continue to pressure the Tigers defensively.

Williams knows that winning in the paint helped them get off to the fast start.

“We had to win inside,” Williams said.

“MaKiah [White] and Laila [Lancaster] did a great job under the goal.”

Lanett stormed their way to a 17-9 lead in the second quarter, but Troup started to find some offense as they went on a 9-3 run to cut Lanett’s lead down to 20-18 heading into halftime.

There wasn’t much action in the third quarter as neither team could seem to buy a basket.

The Lady Panthers were able to hit two field goals and a free throw to take a 25-21 lead heading into the final eight minutes.

Troup opened up the fourth quarter with a basket to cut Lanett’s lead to 25-23, but the Lady Panthers never let their foot off the gas.

With only 21 seconds left, Lanett’s Laila Lancaster hit a free throw to extinguish any hope Troup had of coming back.

Williams knows how big the win was for his team’s confidence.

“We needed this,” Williams said. “That’s a quality ball club. They’re doing a great job with their program.”

Williams knew that only having two days of preparation made things tough, but his girls still executed.

“It was just energy,” Williams said. “They played with good energy and heart. Good stuff is going to happen to us in ball games.”

Williams wants to take the success from this game into the rest of the season.

“We need to score more in the second half. We always hit that dead spot midway through the third quarter. We just have to be more consistent throwing the basketball.”

The Lady Panthers did struggle with connecting on cross court passes, but Williams isn’t too worried.

“It’s just decision making,” Williams said. “We’ve all been 15 and 16, and our coach told us to do something, and it didn’t go that way. I’ll keep preaching it to them and hope it sinks in.”

With almost a week break, Lanett will focus on the LaGrange Christmas Showcase.

“We need to get healthy, stay healthy and get ready for this stretch run,” Williams said.