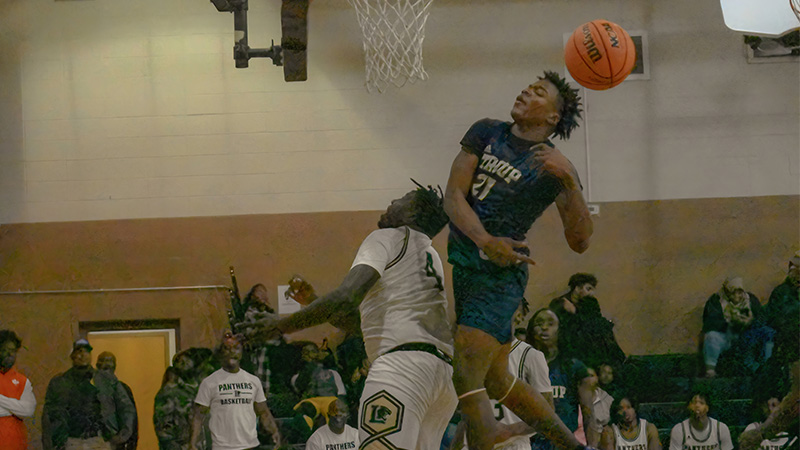 The Lanett boys were down by 15 in the third quarter to their border opponent Troup, but nothing could stop the Panthers as they marched back to beat the Tigers 67-65 in overtime.

Lanett head coach Tay McCants is incredibly proud of how his team responded.

“I always say, ‘Fight, fight, fight,’ and that’s what we did. We got to overtime and capitalized on a lot of turnovers.”

The game looked like it was going to be a blowout in the first quarter when the Tigers got off to a quick 7-0 lead.

It took Lanett three minutes and 15 seconds to get on the board, and the Tigers were able to take a 13-6 lead at the end of the first quarter due to the speed they play with.

The Panthers slowly worked their way back into the game when they scored nine unanswered points to close the lead.

Lanett’s Elijah Whitfield hit a layup to give the Panthers a 23-22 lead with two minutes left in the half.

The Tigers were able to hit shots from the perimeter, and Troup took a 31-25 lead heading into halftime.

Things started to look grim for the Panthers in the third quarter as Troup’s offense exploded with 21 point.

The Panthers were down 50-35 in the third quarter, but their defense started to lock things down.

Lanett was down 58-57 until Nakia Bynum drove to the basket and drew a foul with only 22.8 seconds left.

Bynum hit one of his free throws, and the Tigers couldn’t score on the other end.

McCants explained how his guys mounted the comeback.

“All year, we’ve been having to cut the lead in the third quarter and try to win in the fourth,” McCants said.

“We kept it close until halftime and gave ourselves the chance to win in the fourth quarter. I was disappointed with the effort in the first half. We played fast, but we didn’t play as fast. We came out in the second half and kept pushing.”

It was a battle in overtime as neither team was willing to slow down.

Bynum hit a layup to give the Panthers a 60-58 lead, but the Tigers responded.

After the back and forth, the Tigers had a chance to tie the game at the free throw line down 66-64.

Troup missed one of the free throws, and Lanett’s Alajawon Whitfield hit his own free throw to secure the 67-65 victory.

McCants knew the Tigers would be a tall task.

“I like playing Georgia teams because they have the toughness. Troup has a great coach and a great program, but my guys just wanted it more tonight. I was proud of all my seniors and Jarrious Goodman. We’ve been on him all year about his rebounding and scoring, but he showed that he’s still a grown man.”

McCants told his players that overtime was a restart.

“We told them it’s a new ball game,” McCants said.

“It’s 0-0. I condition them so much that I don’t think Troup had the legs we had in overtime.”

McCants knew his players were under a lot of pressure when they had to step up at the free throw line.

“We don’t shoot the ball well from the free throw line, so I’m just happy we shot 50%,” McCants said.

McCants also knows that a big win like this gives his team plenty of confidence.

“They just have to start putting the pieces together. This is a young team. We’re starting to trust each other and come out with wins. This was a perfect Christmas present. I really wanted to go undefeated in the Smiths Station tournament, but I’ll feel good going into the LaGrange Classic.”

Lanett still has a few things they need to work on before the tournament next week.

“We need to take care of the ball,” McCants said.

“We forced a lot of turnovers on Troup, but we weren’t capitalizing. If we take care of the ball more, we’ll be OK.”

The Panthers were able to study Troup despite only having two days to prepare.

“I have film on them, but y0u just have to be ready to play,” McCants said.

“You can never be prepared by film. You just have to be tough and ready to go. I just want these guys to come together and play hard. That’s all. I’m proud of my guys, and I love the support Panther nation has given.”