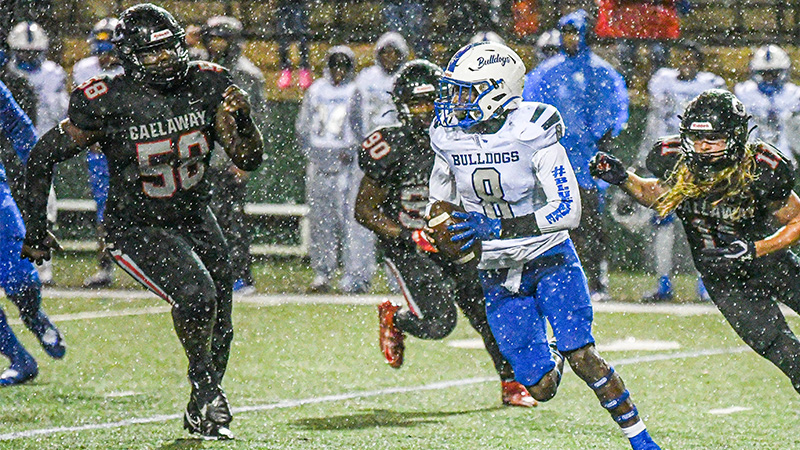 Callaway enjoyed another extremely successful campaign in 2022 as they captured another region title en route to an appearance in the quarterfinals of the AA state playoffs for the seventh straight season. The accolades keep pouring in for the Cavaliers with one player being named to the Recruit Georgia All-State team and another four being named to the honorable mention list.

Elijah Gunn earned his spot on the All-State team by dominating offensive lines. He finished the season with 37 tackles, 10.5 tackles for a loss and three sacks. He was a force in the interior defensive line for the Cavaliers and will be hard to replace. The senior boosted his stock in his senior year and will be departing for Southern Illinois University to play football in 2023.

Dylan Stephens was named to the honorable mention list for his performances all over the field for the Cavaliers. He finished the seasons with 37 tackles, nine tackles for a loss and 2.5 sacks at his primary position — defensive end. On offense, he had 118 yards from scrimmage and had a receiving touchdown to his name as well.

Sam Williams earned his spot on the honorable mention list mainly due to his dominance on defense, but he was also a big part of the Cavaliers offense in 2022 as well. Williams finished with 21 tackles, 5.5 tackles for a loss, two sacks and a forced fumble. He caught six passes for 65 yards and two touchdowns and helped open up holes for the potent Cavaliers rushing attack. Williams will head to the University of Missouri to play football in 2023.

One of those running backs Williams was opening holes for was Qua Whitfield who was also named to the honorable mentions list. Whitfield was the heir to the dominant Cavalier running back throne and took the crown with 1,252 rushing yards and 21 touchdowns. No other Callaway running back had more than 500 yards and his departure will leave a hole atop the running back depth chart.

Exavious Reed had a big senior season on both sides of the ball for the Cavaliers and rightfully earned a spot on the honorable mentions list. Reed led the Cavaliers in receptions (24), receiving yards (387) and receiving touchdowns (4). He was Callaway’s primary tight end and will be heading to the University of Southern Mississippi at that position. He also lined up on defense for Callaway where he registered 23 tackles and three pass breakups.

Callaway had one player snubbed, Camren Gunn, who led the team in tackles for a loss (15), sacks (4.5) while finishing with 35 tackles. If the junior can build on a strong junior season, he will likely earn a spot in his senior year.

All the players that did make it are seniors as the Cavaliers will have to replace some of the most talented players from the 2022 season, but those are the blessings and the curse of being an elite program.