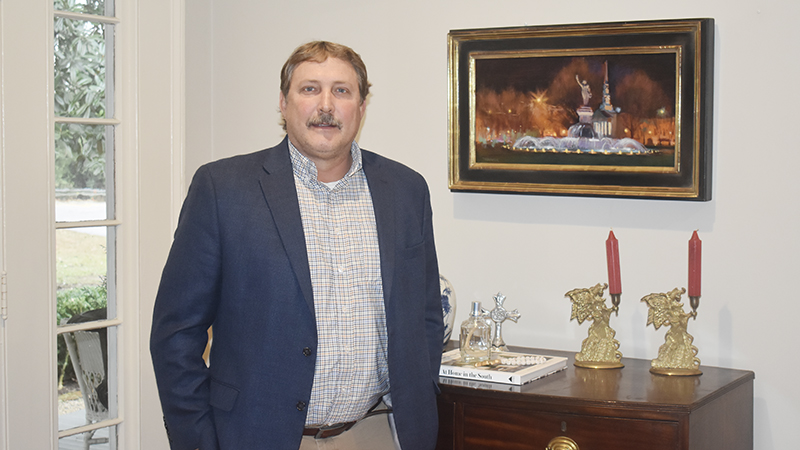 The city will hold a special election on March 21, 2023, to fill Thornton’s unexpired term.

Arrington announced that he is running for mayor on his personal Facebook page on Nov. 27.

Arrington said he had been planning on running for mayor for some time. He just didn’t expect it so soon. He said he had originally planned to run for mayor in 2025 after Thornton told him that this term was going to be his last.

The District 1 councilman is currently in his second term in office, having first been elected to serve on the council in 2017.

Arrington said he has been in LaGrange for his entire life but was born in Arizona due to his father being in the military.

“His family and my mom’s family are all from LaGrange,” Arrington said, “Our family roots here are pretty deep. We’ve been around for several generations here in LaGrange.”

Arrington said he graduated from LaGrange High School and opened his own construction company in 1997 after working in the business for a few years.

“I’ve been in business since then and I love LaGrange. It’s where I was raised and a place that I wanted my family to raise their family, for my kids to come home from college,” Arrington said.

Arrington said his daughter is back in LaGrange, and he is expecting his first grandchild in February.

“LaGrange does a lot of things very well. It still feels like a small town. That’s one of the things that I would love to see continue is to keep the small-town feel, but we’ve got to grow,” Arrington said.

“We have to grow. If we don’t grow, we’re going to die. You can’t just stay where you’re at the entire time,” Arrington said. “A lot of people would love to see LaGrange stay just like it is right now, but that’s not sustainable.”

Arrington explained that the city needs to continue to grow to avoid putting a tax on the people, but it needs to be smart growth, he said.

The biggest thing that LaGrange does well is utilities, Arrington said.

For many years, the city has funded its operations using utility sales rather than imposing a property tax, all while maintaining the lowest rates in Troup County.

“We’re one of the lowest-cost utility providers in the state of Georgia,” he said. “I think we ranked down there with 13 or 14 of the lowest utility costs.”

Attracting industry and the jobs they provide has been one of LaGrange’s strengths, Arrington said.

“We’ve done well with industrial and having infrastructure. We’ve struggled a little bit in attracting businesses and retail, and that sort of thing, but it’s because we haven’t grown very much in the last 10 years.”

“We’ve probably only had three or four percent growth in 10 years and usually, that’s kind of slow,” he said.

“One of the biggest things I see is a need for some racial trust building,” Arrington said, saying he frequently sees racial mistrust. “I think is a lot of generational-type stuff. I don’t see it as much from my generation and below. It’s not as evident or prominent, I guess, but that’s definitely somewhere that LaGrange needs to work on.”

One of the difficulties that LaGrange has had recently is keeping up with increasing housing demands, but housing developments are frequently opposed by residents.

“There is a lot of opposition because it’s in people’s backyards. When it hits in your backyard, it’s different,” Arrington said.

The view from the councilman’s own backyard showed ongoing construction for two of LaGrange’s newest developments, the upcoming Publix shopping center on Vernon St. and the adjacent 300-plus unit Prose LaGrange apartment complex. Both faced opposition during public hearings for zoning changes that allowed the developments. The latter was narrowly approved after a rare tie-break vote from then-Mayor Thornton.

“You can find every reason in the world to believe that it ain’t right when it’s in your own backyard, but you shouldn’t do that,” Arrington said. “People just have to be honest with themselves and ask was that honestly going to be undeveloped for the rest of my life? No.”

Arrington said there are four things that he is passionate about, and he has been an advocate for on the council: safety, quality of life, infrastructure and transparency.

“We have to continue back the fire and the police. We’ve got issues with guns and the same issues everybody does like gangs, but we’ve got to be strong. We’ve got to be out front, getting  ahead of them.”

“It’s parks, The Thread, traffic, shopping, the things that make people have a good life,” he said.

“For infrastructure, we’ve got to keep maintaining what we have and add new things when we need new things,” Arrington said.

Arrington said that Thornton frequently spoke about the importance of remaining transparent.

“That’s much needed. We will do everything in the open. That’s the way I would continue doing things,” Arrington said. “A person of integrity is open and transparent and just being honest with everybody.”