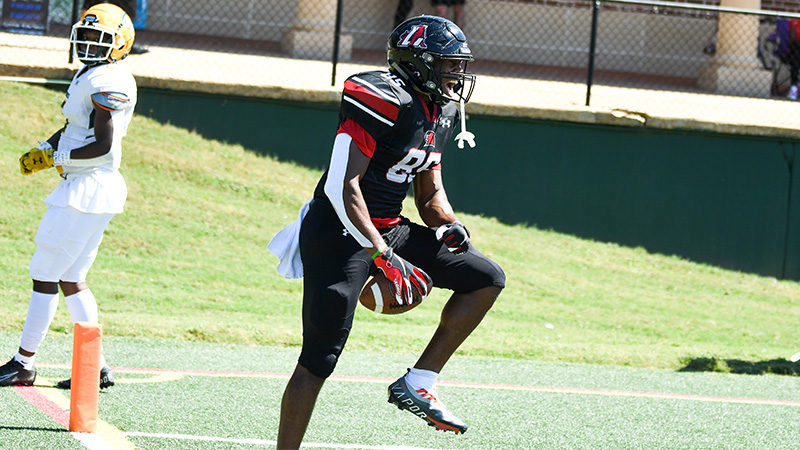 LaGrange College’s De’Queze Fryer put together one of the best, if not the best, careers in Panther football history. The tight end dominated opponents over the last two seasons as he enjoyed a real breakout campaign in 2022.

“My junior year was my real breakout season,” Fryer said. “I started off that season hot. I ended up leading all tight ends in the nation in receiving yards. I actually scored a touchdown in every game.”

The honors and accolades have kept pouring in after an impressive senior season that saw him finish with 35 catches, 433 yards and eight touchdowns. Just this season he has already been named to the American Football Coaches Association Division III All-America Second Team, the D3football.com All-Region Second Team and also to the USA South Athletic Conference 2022 All-Conference Second Team.

“It’s an honor and a blessing,” Fryer said. “I’m blessed to be named an All-American. It’s nice to see my hard work paying off.”

It is an impressive line of honors, but his senior season was not even the best he had as a Panther. During his junior year he was able to rack up 66 catches for 944 yards and 11 touchdowns.

Despite finding personal success, the team around him was rarely as successful. During his three years as a Panther, the team won just six games.

“Losing makes you mad, nobody likes to lose,” Fryer said. “I’m a positive guy, and I felt like we were building something. I wanted to make sure I was doing my part, so I wanted to be a great leader and lead by example. I wanted to control the controllable, I could feel good as long as I did those things.”

He never thought about transferring. It just was not in his nature.

“I never thought about transferring, I’m a Panther all the way,” Fryer said.

Fryer is now preparing for professional football. He has his eyes on the NFL but knows how difficult it is to get there. He is open to other options like the Canadian Football League and USFL and has no problem playing special teams or anywhere else he is needed.

“Whatever opportunity comes my way, I’ll be happy,” Fryer said. “All I need is for somebody at the next level to give me that opportunity.”

Fryer wants his legacy at LaGrange College to be about more than just football.

“I go to the alternative school and help out with the kids there. I want to be a good role model for them,” Fryer said. “I want to be somebody the school and community can look and say ‘he’s a good person.’”

Football will end for Fryer at some point whether that is sooner or later. He envisions himself being a game warden after he hangs up the cleats.

“After football, I might get into coaching, but really I want to be a game warden,” Fryer said. “I love to hunt, and I’m an outdoors guy, so it would be perfect for me.”

Fryer is heading into his last semester at LaGrange College. He has made a major impact on the school and vice versa. From the president to the athletic director to the professors, it has been a mutually beneficial relationship between the Panthers and Fryer.

“John Tures, my political science professor, played a big role in me not wanting to transfer,” Fryer said. “He takes his job very seriously in the classroom, and his door is always open. He wants the best for his students.”

While his time as a Panther is winding down, the impact he made on the college will echo for eternity.