Nutwood plans to open second location, which would include full service restaurant 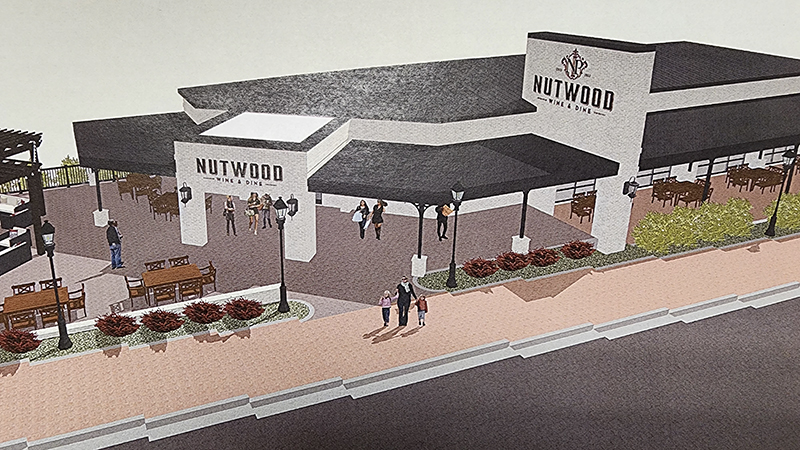 COMING SOON: A rendering is shown of Nutwood Wine and Dine, which would open downtown as a full-service restaurant.

Liechty plans to remodel a former furniture upholstery building at the corner of Byron Hurst St. and Main St. in downtown LaGrange for a secondary location for the winery that would include a full-service restaurant.

The property was recently purchased from the Callaway Foundation in the summer, and Liechty has been working with Smith Design Group on plans to renovate the building.

Liechty said their location on Upper Big Springs Road has been a major success, so they began thinking about another location.

“Business has been good. We usually have a two to three-hour wait on Saturdays. So, we saw an opportunity to come downtown and do a little differently,” Liechty said.

“The Callaway Foundation wanted us to have a full-service restaurant,” Liechty said, adding that the Foundation suggested that they also open on Sunday for brunch.

“One of the problems we found over the years, three years we’ve been open, is that people come in off the interstate and come downtown, and there’s not a lot of opportunity on a Sunday or Monday to eat, separate from fast food, pizza and things like that. So, we agreed to [open on Sunday],” he said.

“We’re going to expand our menu to include aged steak and baked potatoes and five kinds of hamburgers, half pounders, kind of upscale,” Liechty said.

Plans for the new restaurant, which is being called “Nutwood Wine & Dine” on renderings, include a large public courtyard with picnic tables and a four-sided fire pit.

Liechty suggested donating the courtyard and other areas around the property in exchange for in-kind services and potentially to help pay for streetscaping.

The winery owner asked for help with the streetscaping outside the winery on property that would be donated to the city.

“We would make this a public plaza downtown on the corner and have it there as part of the winery and as part of the assets for the city and for us,” Liechty said.

The council was asked to provide landscaping that matches the downtown area on the property that would be donated to the city.

Liechty asked the city to help with in-kind labor or items to keep the standard streetscape. If not, he asked the city to provide information on where to get street lanterns and other products that match the downtown area.

Any work that city employees do to help would have to be on city property, she said.

Kelsey said they would have to negotiate some of the right-of-ways and some funds for the project could come from the upcoming SPLOST, but it would be several years before those funds start coming in.

Councilman Mark Mitchell asked that Kelsey work the best that she can, where funds are available and whatever the city can do to provide [Liechty] with in-kind labor.