Grangers bounces back with win in the LaGrange Toyota Basketball Invitational 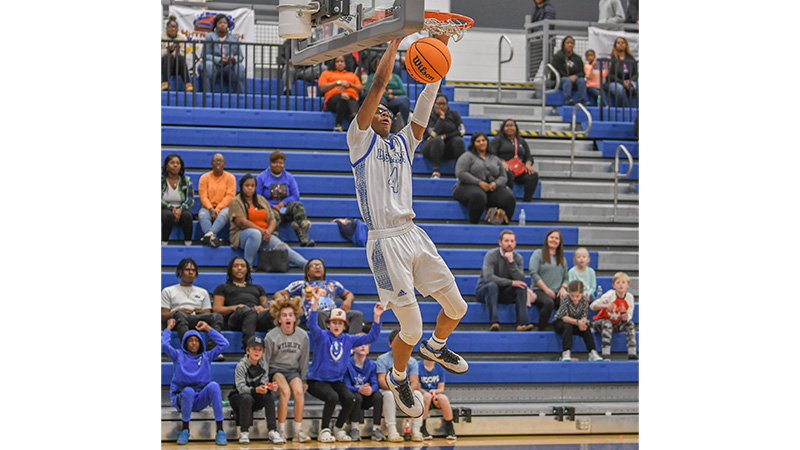 It was just what they needed.

After suffering their first two losses of the season last time out, LaGrange boys basketball responded with a 72-61 win over Hardaway, an old region foe.

“It’s always good to win, you can teach more after a win,” LaGrange coach Mark Veal said with a laugh. “Those losses were humbling.”

LaGrange trailed early. The first quarter was sloppy as the Grangers could not find much of a foothold in the game, trailing by five after the opening period.

The offense came to life in the second quarter, sparked by two 3-pointers from Isiah Green.

“Isiah hit those two threes to really get us going and give us the lead back,” Veal said. “We had some guys step up and do better today.”

LaGrange poured it on with J’Arthur Dunn and Kaleb Salter dominating in the post leading the way. The Grangers were able to take a nine point lead into the break and never looked back.

The Grangers controlled the second half with their defense and a steady offensive attack.

Devin Dowell led the Grangers with 17 points and threw down a pair of ferocious dunks in the first and fourth quarter. Dunn finished with 13 points while Jaquarious Hurston had 11 on three 3-pointers.

“Dunn is going to keep getting better,” Veal said. “We had some guys step up tonight, and that’s what we needed.”

After a bit of a break, the Grangers returned to action ready to go. It was important to build some momentum in the coming days/weeks.

“This is good for us with region play starting next week,” Veal said. “It’s good to get everybody back into a flow.”

This game served as the final game of the opening day of the LaGrange Toyota Invitational. Games started at noon and the last game starting at 7:30 p.m., it was a basketball bonanza in the LaGrange gymnasium. The Grangers are hosting Newnan, Auburn, Valley, Lanett, Carver, McIntosh, Opelika, Harris County, Lovejoy, Woodland Stockbridge and Hardaway.

“One year, we had 14 teams and we probably could have had that this year, but it is a lot of work to host,” Veal said. “It’s good for basketball in the community. People can come out and see basketball from different areas.”

Teams will return to action on Friday starting at noon. LaGrange will play at 7:30 p.m. against Lovejoy.

“Tomorrow we are going to get pressured pretty good,” Veal said. “I’m anxious to see how we handle that because last time we played a team with real pressure we didn’t handle it well.”