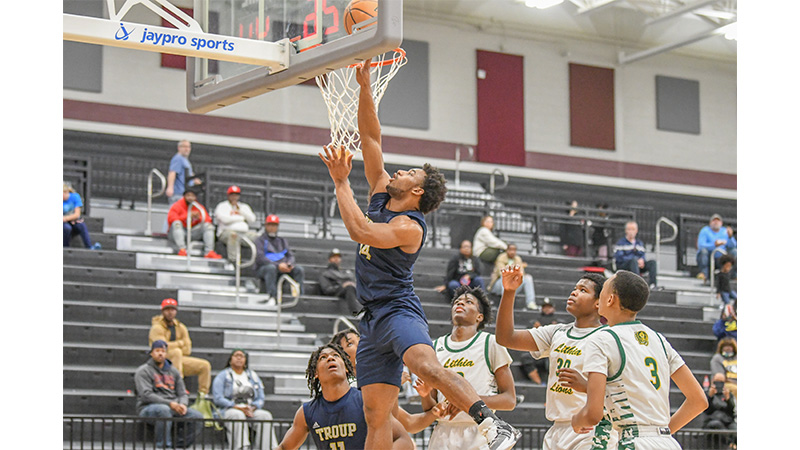 The Troup boys basketball scrapped and clawed to a 62-57 win over Lithia Springs in the Heard County Holiday Classic.

“This team is resilient and has a never quit attitude,” Troup coach Jairo Gay said. “Even when we were down 15 early in the third quarter, we were confident in the guys that we would be able to come back in the game.”

The first quarter was back-and-forth with Qua Birdsong hitting a layup at the first quarter buzzer to give the Tigers a one point lead after the opening eight minutes of play.

After going up 14-13 at the end of the first quarter, the Tiger offense stalled and only scored seven points in the second quarter as their lead turned into a nine point deficit at the break. That marked back-to-back nights that the Troup offense struggled in the second quarter, and Gay chalked it up to getting over the Christmas break.

The offense exploded after Troup went down by 15 early in the third quarter after Gay used a timeout to coach up his guys.

“I told them it was time to dig deep and play with more heart,” Gay said. “I told the team to buy into what the coaches were saying. I gave them a goal, to get a basket and then a stop so we could build momentum for a run.”

“Then guys responded, and it paid dividends for us. The second game in a row we had a big third quarter.”

Taeo Todd was clutch for the Tigers. when they needed him down the stretch, he sunk crucial free throws and scored 11 of his 18 points in the fourth quarter.

“We harp on how important making free throws are,” Gay said. “We work on them religiously in practice. When we get into late game situations, those are the types of things that are going to lead us to victory.”

Troup improved to 6-4 on the season. The Tigers will get a chance to get their third win in a row when they play the hosts in the final game of the Heard County Holiday Classic at 7:30 p.m.

“I want to win this game and ride a three game win streak into region play that begins in the new year,”  Gay said.