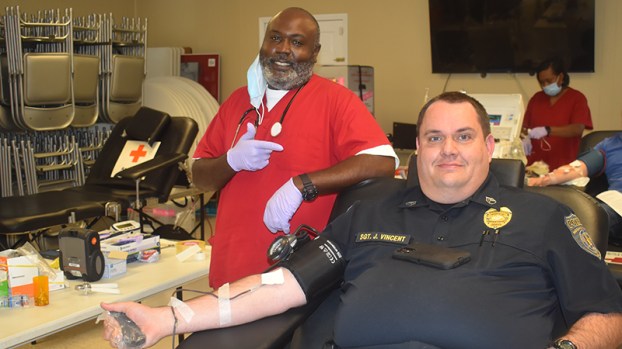 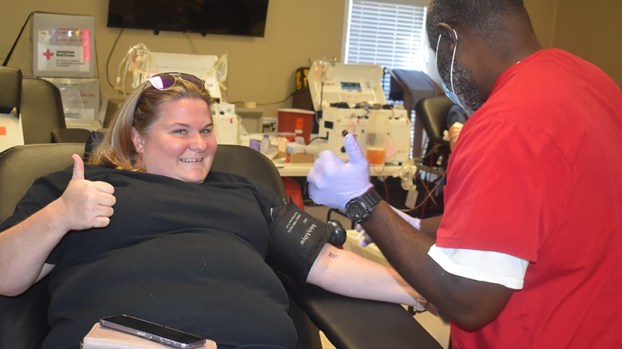 “At the end of the year, we are the last place around that does an end-of-the-year blood drive,” Sheppard said. “We set it up around this time because this is when it’s most needed.”

During the drive, if they were able to collect 20 units of blood, all the volunteers that came were eligible for a raffle for a $250 gift certificate.

Sheppard said the station started hosting blood drives around the time he took over as police chief in 2020.

“When I took over as chief, I went to a blood drive in LaGrange, for the fire department,” Sheppard said. “At that time, we haven’t had an active blood drive in Hogansville in several years. So, I talked to the Red Cross, we got it up and have been doing a blood drive here ever since.”

Local donor Melanie Baswell said she decided to donate blood as a way to give back to her community. Her donation Thursday was her 14th unit given over several years.

“As someone who lives in this community, I appreciate the fact that we can give blood here in our own community and support the police department,” Baswell said. “I am thankful that I can donate because there are many people who aren’t able to. Since I can, I try to come out every time.”

Sheppard, who has donated over a gallon of blood, said donating blood is a good thing to do because it can save someone’s life.

“It’s the one thing that we can do that only takes about 15 minutes and that blood can be what saves somebody’s life,” Sheppard said. “If you ever needed blood, had surgery, or ever had to have blood for anything, all of that comes from donors. We can’t make it. It all has to come from people willing to donate it.”

In their time holding the blood drives, Sheppard said they have seen hundreds of people come out to donate.

“We have our regulars here that every time that we have a blood drive they come out,” Sheppard said. “We always have new people that come in, but over the years, we’ve seen hundreds come donate — myself and my wife are both over a gallon.”