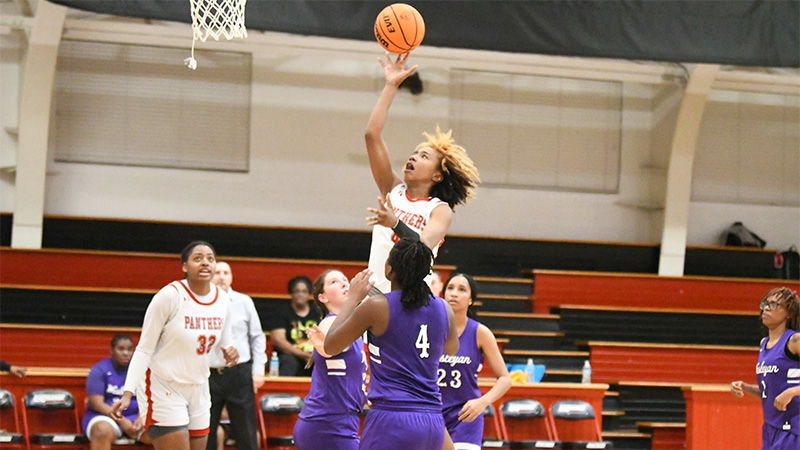 LaGrange College women’s basketball tipped off 2023 with a 95-32 win in their conference opener against a lifeless Wesleyan team (0-9) on Tuesday.

The Panthers took no time finding a groove as they scored the first 15 points of the game. It was an avalanche of points as the Panthers took a 31-9 at the end of the first quarter and expanded that lead to 48-17 heading into halftime.

LC never slowed up despite making substantial substitutions throughout the game. Every single woman that was dressed got playing time with 17 players seeing action in the game and all but one got on the scoresheet.

No player got more than 17 minutes as play time was spread around with the game’s outcome no longer in the balance after an opening flurry by the Panthers.

Starters Zyhia Johnson and Ema Turner led the team in scoring with 12 points each — Johnson did it in only eight minutes of play and remains the team’s leading scorer on the season, averaging 14.2 points per game. Turner — who is not known as a shooter — was raining 3-pointers (4-7) on a wet and windy evening in LaGrange.

Skylar Edwards came off the bench and impressed with 10 points, four rebounds, and three steals in just seven minutes of action. Laila Battle also took her playing time and ran with it, leading the team with seven assists and four steals while also scoring seven points.

After missing the majority of the beginning of the season with an injury, Breonna Glover was able to get in five minutes of action as she continues her recovery. Glover was the team’s leading rebounder and the third leading scorer a season ago and is a big part of the puzzle for the Panthers.

LaGrange College improved to 7-3 overall and has won five of its last six games. The Panthers were happy to get their first conference win since joining the Collegiate Conference of the South in 2022. LC will have a chance to move to 2-0 in conference play when they travel to Maryville on Friday, which begins a four game road trip for the Panthers, who will return to their home court on the 17th.