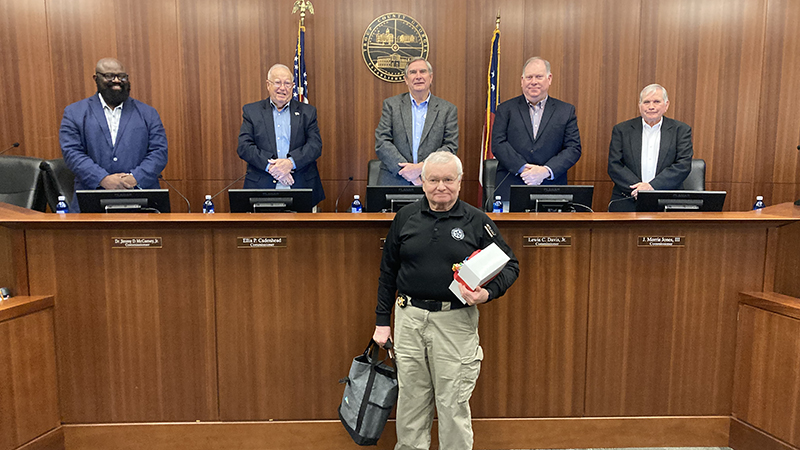 During the Troup County Board of Commissioner’s work session on Tuesday, the county recognized the monthly Richard English, Jr. Strongest Link Award of Excellence and the overall platinum winner of the award for the year.

Debra Trapp, Case Manager with the Court Services, was selected as the Platinum Richard English, Jr. Strongest Link for 2022.

The annual recipients of the platinum award are nominated similarly to the monthly award winners.

Trapp was nominated for the platinum link award for her continued positive impact on many participants in the DUI Court program and co-workers saying she’s a joy to work with.

Trapp was unable to accept the award on Tuesday.

Court Services Director Lindsay Mobley accepted the award on her behalf and thanked Trapp for her service.

“She would be proud of this, and we’re proud of her,” Mobley said.

Wheeler serves in the security room inside the jail that monitors the facility via video camera feeds.

The anonymous person who nominated Wheeler said that he makes the jail run better by being an eye in the sky that is always watching everything, helping everyone and helping the jail be effective and efficient.

During the regular portion of the work session, the commissioners discussed the acceptance of a Mental Health Court Supplemental Law Enforcement Grant Award.

The grant requires a $1,125 match and would go to the Coweta County Circuit Mental Health Court for both Troup and Carroll County.

Smith said Troup County will wrap up its relationship with the Carroll County Mental Health Court at the end of this fiscal year.

“The plan has been to have Carroll County to do their own thing with the mental health court, and we are going to do ours,” Smith said. “I think that it is a really good plan.”

The relationship has been in place since 2017.

The commissioners also discussed a request from the county service shop to replace their current service truck. The current truck is a 2009 Ford F250 with 192,000 miles and has mechanical issues such as worn front and rear suspension, an exhaust system that needs replacing, and loss of power, among others.

The shop has requested approval to purchase a replacement truck in the amount of up to $75,000.