Callaway drops narrow one on the road 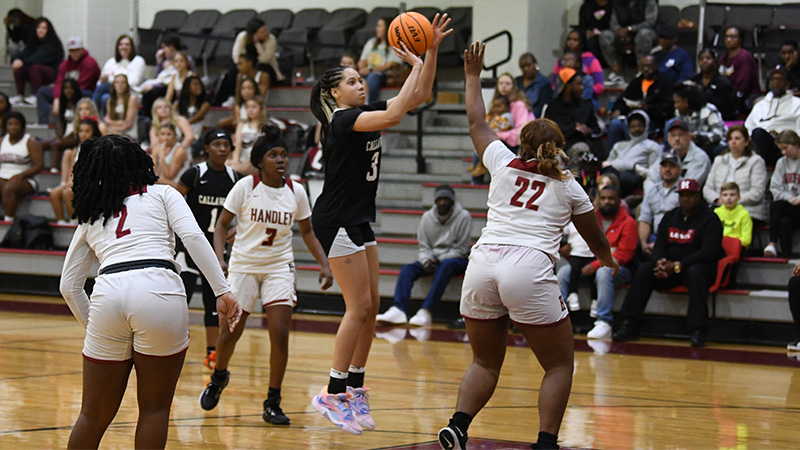 The Callaway Cavaliers returned to the court for the first time since Dec. 16 and took a narrow 42-38 loss to Handley on the road on Thursday.

The Cavaliers offense stalled for the majority of the first half as they scored single digit points in the second quarter and only 18 points total in the first half, but their own defense kept them in the game which allowed the Cavaliers to take a three point lead at halftime.

The second half was back-and-forth with momentum swinging like a pendulum. By the end of the third quarter, the Cavaliers trailed by just a single point.

Handley was able to gather some of that momentum in the early fourth quarter, stretching its lead up to five points, but the Cavaliers kept on fighting.

Lacey Thomas hit a couple free throws with two and a half minutes to go to cut the lead to just one point again. A free throw by Thomas tied the game at 35 with 1:56 left on the clock.

Handley came back to score two free throws with 1:40 left and from there it was on a knife’s edge. It remained a 37-35 lead for Handley as Aniyah McFarland stepped up to the free throw line with a chance to tie the game with 20.8 seconds left in the game. McFarland went 1-for-2 from the line to cut the lead to just one point.

After Handley sank a couple of free throws to extend its lead to three, the Cavaliers promptly turned the ball over with the game on the line. The Tigers hit a few more free throws at the death to make the lead a bit more flattering.

Handley is now 9-2 and a top team in AAAA in the state of Alabama — currently ranked no. 9.

The Cavalier offense was carried by Raniya Mahone (13 points), Thomas (12 points) and McFarland (11 points) with the rest of the squad combining for just two points total as the majority of players struggled to break down the Handley defense.

The Cavaliers have now dropped two games in a row and will be looking to recapture some of that early season momentum that saw Callaway rattle off four straight wins.

The Cavaliers have now lost three games in a row to drop to 3-4 on the season.