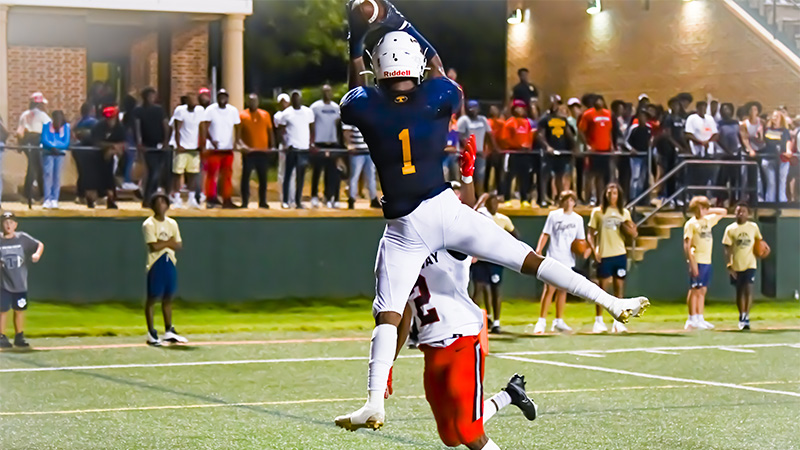 Despite high school football wrapping nearly a month ago, the honors keep pouring in for the Troup Tigers and Callaway Cavaliers. The Cavaliers had three players named to the Atlanta Journal Constitution All-State team while the Tigers had two players make the team as well as two honorable mentions.

For the Cavaliers it was Elijah Gunn making his second All-State team for the 2022 season as well as Sam Williams and Exavious Reed being named to the team.

Williams earned his spot mainly due to his dominance on defense, but he was also a big part of the Cavaliers offense in 2022 as well. Williams finished with 21 tackles, 5.5 tackles for a loss, two sacks and a forced fumble. He caught six passes for 65 yards and two touchdowns and helped open up holes for the potent Cavaliers rushing attack. Williams will head to the University of Missouri to play football in 2023.

Elijah Gunn earned his spot on the All-State team by dominating offensive lines. He finished the season with 37 tackles, 10.5 tackles for a loss and three sacks. He was a force in the interior defensive line for the Cavaliers and will be hard to replace. The senior boosted his stock in his senior year and will be departing for Southern Illinois University to play football in 2023.

Reed had a big senior season on both sides of the ball for the Cavaliers and rightfully earned a spot on the team. Reed led the Cavaliers in receptions (24), receiving yards (387) and receiving touchdowns (4). He was Callaway’s primary tight end and will be heading to the University of Southern Mississippi at that position. He also lined up on defense for Callaway where he registered 23 tackles and three pass breakups.

For the Tigers it was Taeo Todd and Qua Birdsong being named to the team with Qua Moss and Noah Dixon being named as honorable mentions.

Todd led the way for the Tigers and was named to the All-State team and was named offensive player of the year in AAAA by the AJC. He finished the season with 2,454 passing yards and 29 passing touchdowns while running for 2,000 yards and 27 touchdowns across 14 games. Todd was also named to the Georgia Public Broadcast and the Recruit Georgia All-State team just a few weeks ago. The junior quarterback will be back for his senior season looking to build on a junior season that was one of the best in Tiger history.

On the other side of the ball, Birdsong was named an All-State player for the second year in his career and he still has one season left as a Tiger. Birdsong terrorized opposing offensive lines and led the team with 12.5 tackles for a loss and 49 tackles despite playing in only 11 of the 14 games this season. Birdsong was named to the All-State team for his defensive contributions, but his offensive performances were equally as important to the Tigers. He had seven catches for 44 yards and two touchdowns while helping to set the edge in the run game as one of the Tigers top tight ends.

Moss was named to the honorable mention list for his play all over the field for the Tigers. Moss had 29 tackles and an interception and secured a spot on the team at the cornerback position. Moss was that and more for the Tigers. He was their return man on special teams and their leading receiver on offense, finishing with 53 receptions, 892 yards and 11 touchdowns. Moss excelled in all three phases in his final season as a Tiger.

Dixon missed a long stretch of games at the end of the Tigers season as was sorely missed. The junior safety patrolled the backend for Troup and the defense struggled to keep up its early season momentum without him. Dixon finished fifth on the team with 40 tackles despite missing five games. Despite playing on the backend, he was still able to register three tackles for a loss as well.

Both the Cavaliers and Tigers made deep runs in the playoffs after claiming region titles and have been justly rewarded for their successful campaigns in 2022.