Meet me on the mat: Troup hosts and wins county championship 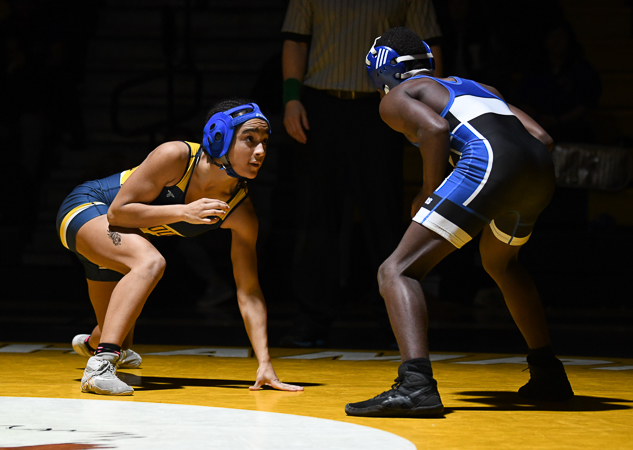 Meeting on the mat.

All three local high schools piled into the old gymnasium at Troup High for the wrestling county championship on Tuesday.

It was the hosting Tigers that came out on top, but the action was more about setting the three teams up for region duals that are coming up quickly. Region is the most important part of the season for the wrestling programs as they vie for spots in the playoffs.

Troup and LaGrange will be battling it out for region 4-AAAA supremacy with the Tigers being favored to come out on top.

“We learned that we are gritty and tough and we have a bunch of guys that are going to go out there and get after it,” LaGrange coach Michale Pharis said. “We are not as technically sound as we want to be or will be, but we are confident in what we do.”

Pharis believes Troup will be favored to claim the one seed and its first region title since 2018, but has his eyes on capturing one of the other three playoff spots.

Troup has beaten LaGrange in every match this season, including on Tuesday, but for the Grangers it is all about making progress.

“My mantra has been that this is a marathon and not a sprint,” Pharis said. “When we wrestled against these guys earlier we weren’t as sharp.”

Troup beat LaGrange 67-12 in the county championship, but the two teams will meet again on Saturday with more at stake than just bragging rights. Both teams will be kicking off their region schedule when they meet again at Troup High on the weekend.

Pharis has been happy with the progress his wrestlers have made.

“Tayvon (Howard) wrestled a very tough match and only lost by one point to a kid he’s never beat tonight,” Pharis said.

The matchup between Howard and Troup’s Christian Hudson might have been the best match of the night as the two went to war with Hudson narrowly edging out a victory for the Tigers.

For Troup, it was once again the underclassman duo of Evey Hill and Elijah Ward that made waves once again. Just a freshman and sophomore respectively, the two wrestlers cleaned out their weight classes on Wednesday and barely broke a sweat in the process.

Callaway also made its presence felt on the mat on Wednesday. Despite losing both matches, the Cavaliers are primed and ready for region play after testing themselves against bigger schools over the holiday break and into the new year. Elijah Copeland and Jojo Shuman continue to impress for the Cavaliers.

All three teams have seen each other quite frequently on the mat recently, with all three teams participating in the Gary Silva Invitation and Dariel Daniel Tournament over the festive period. This has kept the teams sharp heading into the all important region duals in the coming weeks. While it could be the last time the Cavaliers share the mat with their county rivals, Troup and LaGrange still have unfinished business as they both look to claim a spot in the playoffs in the same region.

High school wrestling was not the only level on display at the county championship. Members of the Long Cane, Gardner Newman, and Callaway Middle teams showed why they are the future of wrestling in Troup County.

Once enough of the matches ended, Troup turned the two mat rotation into a solitary mat under the spotlight as all the other lights in the gym were turned off with all eyes focused on the individual wrestlers in the circle.