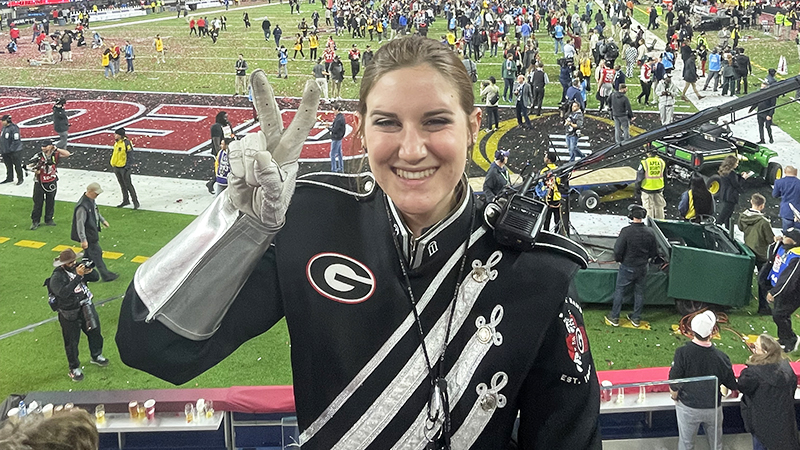 Rejoicing in the back-to-back national titles is Hannah Marston, the drum major of the UGA Redcoat Marching Band.

“The energy in the stadium was immaculate and getting to witness the margin of Georgia’s victory over TCU right in front of me was amazing, especially since I was there with my friends and the band,” Marston said.

Marston, originally from Harris County, where she played clarinet for the Harris County High School Marching Band, said becoming the drum major for a much larger band has been a very different but wonderful experience.

“UGA’s band is composed of nearly 400 members, which is roughly four times the number of people I was used to marching with in high school,” Marston said. “Getting to lead the Redcoat Band as the drum major has been just so much fun. I was not a drum major in high school, so on top of the shift in the band size, leading the band has been mind-blowing. I love being in front of the band and conducting and wouldn’t change it for anything.”

Marston said being present when the Bulldogs won Monday was everything she ever wished for, but the team’s win in 2022 holds a special memory for her.

“It was an honor to have witnessed such a well-played game and see Georgia defeat one of its biggest rivals, Alabama,” Marston said. “It was Georgia’s first national championship title win since 1980, so I felt very lucky to have been there of all years.”

The 2023 national championship was held in Los Angeles in the SoFi Stadium, taking the band across the states for show time.

“The band flew out this past Saturday on two chartered flights, and we were able to experience the city, the Santa Monica Beach, Hollywood, Universal Studios, and more,” Marston said. “Although we had rehearsal and FanFest gigs, we had a lot of downtime to hang out and explore the west coast.”

As a fourth year music, entertainment and media studies major, Marston said she feels winning another national title has allowed the band to understand its impact.

“We are there to help cheer on the Dawgs, the fans, and attribute to a lot of the energy that electrifies the stadium,” Marston said. “I believe this purpose is instilled in every member. We understand our importance in the game, and more importantly, we understand what it means to be a Georgia Bulldog.”