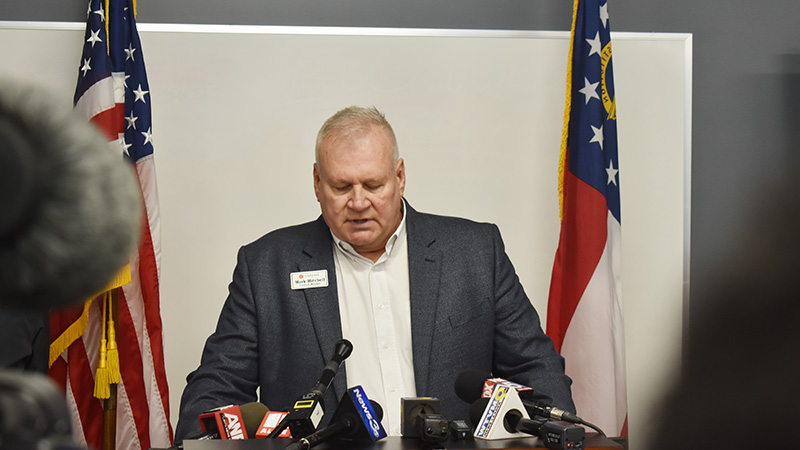 On Friday afternoon, local officials provided an update on the tornadoes that impacted the area Thursday.

A press conference was held at the Troup County Emergency Operations Center on Hamilton Rd.

Steele said they received numerous reports of trees blocking roadways and on top of cars and people in traffic. Interstate 185 northbound near mile marker 47 was closed for approximately seven hours due to damage from the storm.

According to Steele, four patients were treated at WellStar West Georgia Medical Center for non-life-threatening injuries related to the storm.

“We feel very fortunate as a community that we experienced this event without any major injuries or deaths,” said Commission Chairman Patrick Crews, noting many homes have major structural damage from the storm.

A total of 626 electric customers or 3.7% of Diverse Power’s customers in the county were still without power as of 6 p.m. Friday.

LaGrange Councilman Mark Mitchell, who is currently serving as mayor pro-tem, said over 100 homes were damaged by the storm.

“We have calculated approximately 106 homes have had some type of damage within the City of LaGrange,” Mitchell said.

He added that three families needed assistance with housing due to damage to their homes they were placed in local hotels.

Mitchell said for LaGrange approximately 1,500 residents had their power knocked out and most have already been restored.

“Our industrial parks have several plants that are not up and running with power. Our city staff is currently working on that as we speak. One of the highest priorities is one of the Kia suppliers that are offline which is keeping the Kia Motors plant from operations. So, we’re working on it as a high priority,” Mitchell said.

Mitchell said that the Red Cross set up a temporary shelter at Faith Baptist Church at 552 Hammet Rd. Those needing assistance with reaching the shelter can contact the City of LaGrange or Troup County for assistance.

LaGrange City Manager Meg Kelsey said most city roads are open to where they are passable except for Orchard Hill Rd., which remains closed to through traffic as cleanup continues.

County Engineer James Emery said the county is calling Stewart Rd. closed Cars can still get through but trucks can’t, he said.  Several other roads only have one lane open but are passable, he said.