‘It warms my heart:’ Prayer vigil held at Lafayette Square for those impacted by tornado 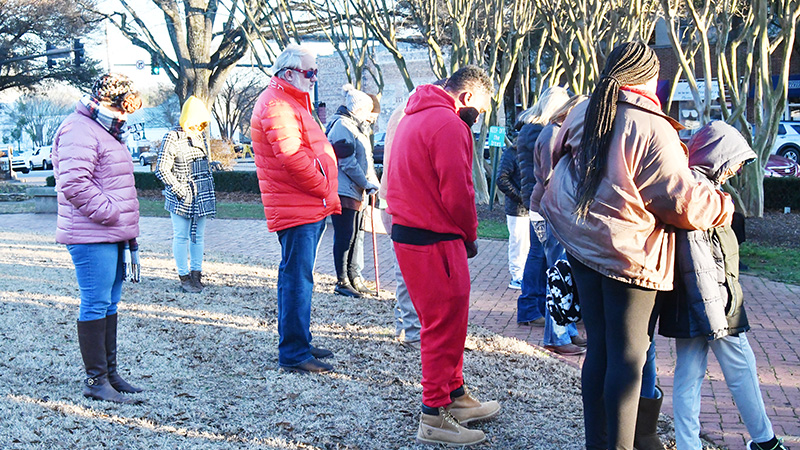 A prayer circle was held Saturday at the LaFayette Square for those affected by the tornadoes that hit parts of LaGrange Thursday. The event was organized by LaGrange City Councilmen Leon Childs and Willie Edmondson.

Childs said he and Edmondson put the vigil together because even though there were no fatalities or no injuries, it was still a mental shock to everybody affected.

“When people pull down into the subdivision of Lexington Park or Buck Murphy Road or Hamilton Road or even Whitesville Road, and they see where it looked like a bomb went off —that’s a mental shock because you’re not used to seeing this,” Childs said. “We just felt a need to do this for the community to try to bring prayer, and unity and let everybody know you have someone that you can talk through this.”

Parts of town that were severely impacted were Buck Murphy Road, Hamilton Road, Baldwin Park and Lexington Park, as well as other areas around Troup County.

“It was just a blessing because if it had happened in the morning, it would have been much worse. So, we come to pray and to be thankful, but more than that, to pray for the people that were affected,” Edmondson said.

Childs, who was among those affected in Baldwin Park, said he has never experienced a day like Thursday in his life.

“My belief in God got stronger,” Childs said. “When the wind got real hard, I looked outside and I saw a big piece of a roof in the air — that’s when I went in dove in the closet with my wife. After it was over, I went outside and looked through the subdivision to see all these homes with the roofs gone. That’s when I knew that a tornado had touched ground in our subdivision.”

Scott Ledbetter said he and his family came out to support the community in its time of need.

Local resident Alycia Dunson said the vigil is just the uplifting her family needed after their home was damaged.

“Despite the cold, I feel warm,” Dunson said. “It warms my heart that my community cares about us and wants to see us through this hard time.”

Edmondson said the vigil was for prayer but also to show appreciation for everyone who came and helped the city in its hardest hours.

“The awareness is to let everybody know how appreciative we are for the city, all working together, all pulling together in this hard time. We’re trying our best to make the people that’s been affected feel whole.”