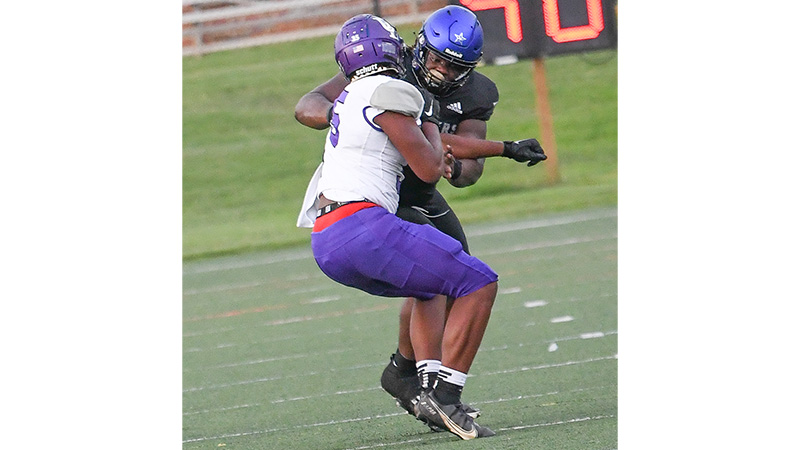 Jycel Mosley is one of a kind for LaGrange High.

The junior is already a two-time all-state player and brings a natural energy to the offensive line room.

“First year, I wasn’t even thinking about being an all-state player, so it was surprising,”  Mosley said. “This year it was surreal because I wanted it. I really wanted it.”

He played all over the Granger offensive line this past season as the team dealt with injuries up front throughout the 2022 campaign. Although he feels most natural on the right side, he can play all along the offensive line and wants to be in the best position to help the team win.

“I can play all five offensive line positions,” Mosley said. “I like to play right guard. Really the whole right side, both guard and tackle are the positions I like.”

He earned the all-state honor in his sophomore season as a right tackle and that is the position he began his junior campaign at. Unfortunately, he had to move all along the line as the team figured out its best combination as well as deal with injuries.

Right tackle is second nature to him which makes playing left tackle that much more difficult for him. He can do it but it does not come as naturally for him as the kick step is completely reversed from his normal movement.

Mosley does not care about statistics, which makes him a natural fit for the offensive line who are the type of players to bring their lunch pail to work and receive little acclaim from those outside of the locker room. But those inside the locker room know how valuable the guys up front are for the offense.

“All those guys behind us make it easier for us (offensive lineman),” Mosley said. “They get all the stats, but they show love to us too.”

Years ago, before Mosley moved to LaGrange, he was playing running back in parks and rec football over in Milledgeville.

“There was a weight limit, so I couldn’t even run the ball anymore,”  Mosley said with a laugh. “I decided to start playing o-line back in rec ball, but I started really loving it in high school.”

He moved to the area in fifth grade, and it was not always his destiny to be a Granger. Originally he was scheduled to attend Callaway in high school but being a Granger runs in the family.

“My family is big on football,” Mosley said. “My dad went here and played with Wesley Woodyard.”

The way Mosley approached the position changed in high school. Having coaches like Matt Napier and Thomas Cox show him the way has only enhanced the way he sees the game.

“My feet have gotten way faster. I’m stronger,” Mosley said. “My game has elevated a lot since I got here.”

With his immense potential and his already stellar resume, Mosley has eyes on taking the next step of his football career.

Mosley will be throwing the shot put for the track and field team in the spring before giving it his all for the Granger football team one last time in the fall in what he hopes is one for the storybooks.

“Since I have been here, we haven’t made it out of the second round of the playoffs, so I definitely want to get past the second round,” Mosley said. “Really, I want to win a state title. I don’t have any selfish goals. I don’t care about all-state anymore. I want to leave here with a ring.”