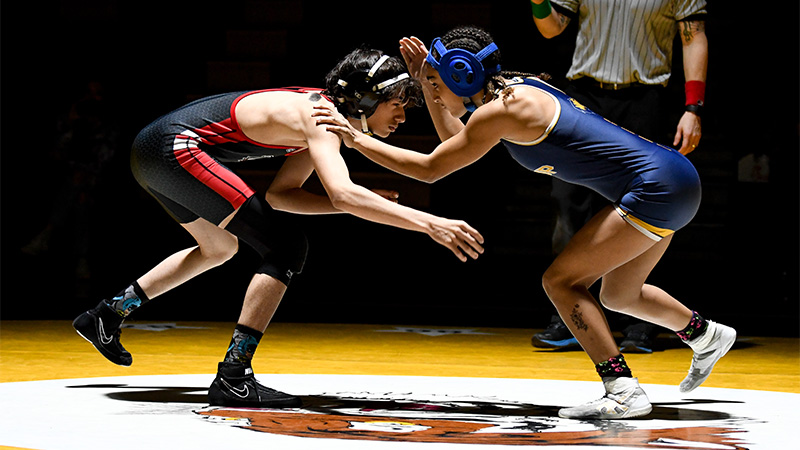 It was a special day for Troup wrestling on Monday as the Tigers finally got to host the sectionals after seeing the originally scheduled date and time pushed back after tornadoes came through the area.

The Tigers took their chance and came out on top of the three-team sectional also featuring Mt. Zion and North Hall. It is the first time the team will advance to the elite eight duals since coach Drew Garner took over the program in 2019.

“Today puts things in perspective for our program,” Garner said. “The kids see where they are. This is my first time as a head coach going to the elite eight, and I know it is [the wrestlers] first time too, so this is a special moment for a lot of these kids and the program.”

The opening match saw the Tigers pull a win out of the fire. After trailing early, the Tigers needed their wrestlers down the stretch to come up with some big performances, and they answered the bell.

“I told some of them ‘no pressure, but we need a pin,’” Garner said with a laugh. “Five of the last six wrestlers got pins, so we could beat them by three.”

Troup narrowly edged out North Hall 37-34 for a victory that sent the Tigers into the round of 16.

“We knew this one was going to be our toughest match,” Garner said. “North Hall is traditionally a pretty good school, and they won state a few years ago. Two of their guys are ranked no. 1 in the state (in their weight class).”

“Every year is a stepping stone, and it’s all about making progress,” Garner said. “You have to experience stuff for the first time to build that tradition of culture. A lot of this is new for these guys, but it is also expected from these guys. We are not going to lower are expectations just because it’s a new experience for them.”

One of the matches of the day saw Braylon Hardy beat Mt. Zion’s 190 lb wrestler 7-5 in an extra period. It was a true war that saw Hardy tie the match at five with under a minute to go to extend the match to an extra period that saw him get a takedown for the win.

“It felt normal,” Hardy said. “I’ve been in wars like that before. I always have confidence.”

Hardy is one of many success stories for the Troup wrestling program since Garner took over. Hardy weighed in at 267 lbs as a freshman and has worked his tail off to trim down while adding muscle to his frame. Now, he is a junior that could help lead the Tigers to a deep run.

Hardy was not the only wrestler who impressed Garner on the day. Christian Hudson used his experience and tactical knowledge to edge out two one-point victories over Mt. Zion and North Hall wrestlers.

Duals wrestling is not all about winning, it is also about how you lose which can be the fine margins for the team prevailing or falling just short.

“Dona Dennis got thrown on his back early on against North Hall and him fighting off his back and not getting pinned that match and in my opinion that was the deciding factor in us winning that dual meet,” Garner said.

The goals for Troup wrestling have shifted this year, from winning a region title to winning sectionals and now to challenge the best of the best and finish in the top five. Garner believes this team is top five in 4A and is going to prove it Saturday.

“Our goals have been reset,” Garner said. “In the midst of this season, we have changed our goals from winning the region title to making a deep run because we feel like we’ve been a top five team all season.”

The Tigers will be heading up to Lovett High School in Atlanta Saturday for the biggest duals matches most of these wrestlers have ever been in.

The Tigers will need to go 3-0 on Saturday to claim the state title — a single loss will send them to the losers bracket and limit any chance they have of winning the state title. Troup will be matched up with Central Carrollton in the quarterfinals and with a win will take on the winner of the Sonoraville/Chestatee matchup in the semifinals. If the Tigers make it all the way to the championship match they will face the winner of the Southeast Whitfield/Lovett/Heritage/North Oconee side of the bracket.

Lovett is coming off a 2A state title a season ago while current reigning 4A champs West Laurens were eliminated in the round of 16 by North Oconee so it only gets tougher from here for the Tigers.

“The expectations here are to go and compete for a state title. That is what Troup wrestling used to be like, and that’s what we’re trying to bring back,” Garner said.