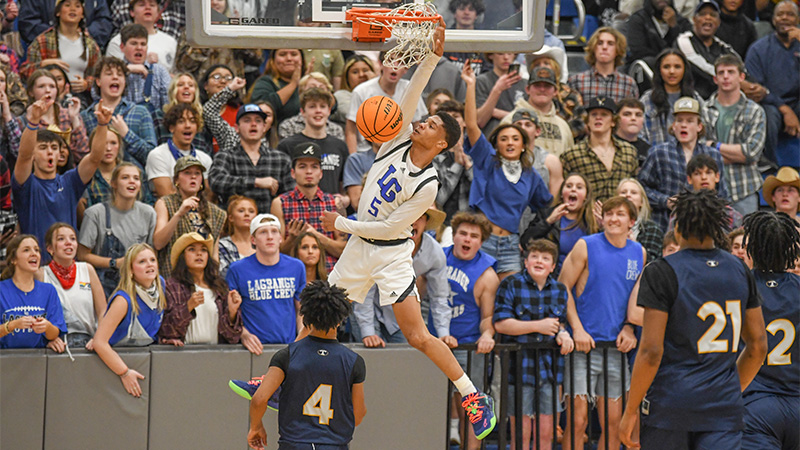 The LaGrange boys basketball team outlasted rivals Troup 63-52 on Tuesday in front of the Granger faithful.

“This is a big help for us as we are playing for the top spot (in the region) right now,” LaGrange coach Mark Veal said. “There is a lot of ball left so we have to keep collecting region wins.”

It was not as dominant as the Grangers have been over the Tigers in years past as Troup has found new life under first-year coach Jairo Gay.

“It is another region game, but the other region games don’t have crowds like this,” Veal said with a laugh. “[Troup] played really well and they had some players step up and hit big shots and kept them in it.”

The first half was tight with the Grangers just narrowly edging out the Tigers, heading into the break leading 33-27.

LaGrange could never quite separate enough to put away the game early, but were able to close it out by the final minutes of the fourth quarter. The Tigers fought hard but could never score the deciding basket or get a defensive stop down the stretch.

Troup trailed by just five points heading into the fourth quarter but could not find much offense in the fourth with the Tigers only scoring 10 points in the final eight minutes of play.

Devin Dowell was sensational for the Grangers. He sparked the Granger offense all night, scoring a game high 26 points.

“It feels good. We run LaGrange,” Dowell said, flashing a smile. “Nobody is beating us when we play like that. We are confident right now.”

16 of Dowell’s points came in the second half when he completely took over the game.

Dowell was not the only player that came in clutch for the Grangers and while he did it with his offense, another couple of LaGrange players stood out on defense in the waning moments of the game.

“I know Garrett (Jacobsen) took four charges and that was huge,” Veal said. “J’Arthur Dunn took two as well. Taking six charges is huge. It gives them a foul and takes away buckets. We work on taking charges everyday so that was super nice to see.

For the Tigers, Todd led the way with 14 points while Jalen Brown chipped in 13 points.

Troup fell to 7-8 overall and are 0-4 in region play. After winning three games in a row, the Tigers have now dropped four straight games. The Tigers will return to action on Friday when they travel to Trinity Christian.

LaGrange improves to 14-3 overall and 5-1 in region play. After a 22 comeback win last time out and now, a win over their bitter rivals, the Grangers are starting to build some momentum heading into the home stretch of the regular season.

The Grangers will be back on the court on Friday when they host North Clayton and will then travel to Trinity Christian on Saturday.

“We haven’t matched up against Trinity yet and they beat Whitewater by 20 or so the other night so that is going to be a tough game,” Veal said. “There are no off nights. We play North Clayton Friday and our first matchup was back-and-forth with them.”