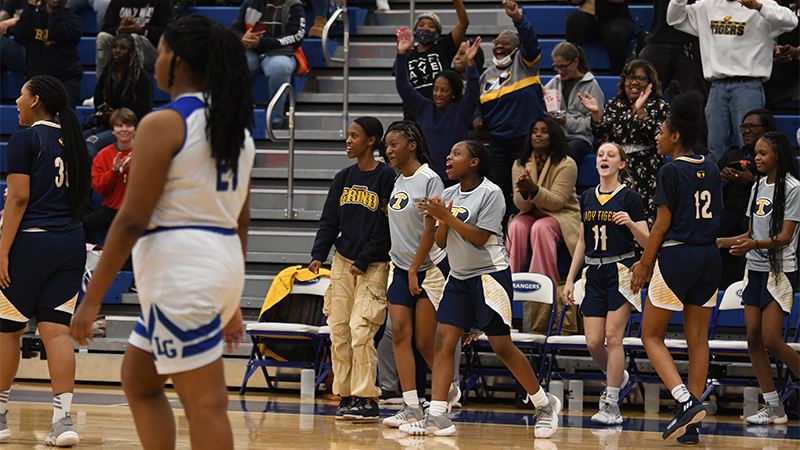 The Troup girls basketball team had to make a second half rally to down their crosstown rivals LaGrange 42-38.

“We showed some fight and camaraderie,” Troup coach Carla Thornton said. “They played hard for each other and really wanted this win for each other.”

The Tigers were sluggish on offense early, scoring just 15 points total in the first half and trailed by six at the break with the Grangers seemingly in control. Even when the offense faltered, the defense picked up the slack and kept the Tigers in the ball game.

After scoring zero points in the opening quarter, Alexcia Murphy sprung to life over the final three quarters to lift a struggling Tiger offense. She scored a game high 18 points in the game.

“I kept my composure and held it down for my team and my teammates held it down for me,” Murphy said. “A lot of people were talking about how we were going to lose so we had to come out here and show them they were wrong.”

The Granges, who so desperately wanted to vanquish their rivals for the first time in nearly five years in girls basketball, could not get the offense going in the third quarter as the Tigers came rumbling back to take a one-point lead heading into the critical fourth quarter of play.

“We were getting looks in the first half but they just weren’t falling,” Thornton said. “We just kept playing confident and knew that things would turn in our favor and fortunately they did. The girls really trusted in the coaching staff and what we were telling them to do.”

One of the reasons the Grangers offense struggled down the stretch was the fact that one of their most important players — Peyton Swint — went down with a lower leg injury with 6:45 left in the second quarter. While Swint eventually returned, she was clearly hobbled which limited the Granger offense that relies on her to initiate the attack.

The Grangers had their chances in the game though. Adriana Kendricks hit a 3-pointer followed by a Corriah Williams layup that gave the Grangers a 36-31 lead with 6:20 left in the game.

A two-point shot cut the lead to just three points and then Sheniyah Philpot drained a 3-pointer from the corner to tie the game at 36 with 4:55 left to go. It was not the only time Philpot would come clutch in the game. A few moments later Murphy hit an easy layup in transition to give the Tigers a 38-36 lead.

“Philpot was huge for us, especially with her being just a freshman,” Thornton said.

The teams traded free throws down the stretch with Philpot hitting a crucial one with 37 seconds left to give the Tigers a 40-38 lead.

The Grangers could not buy a basket on its next possession. Murphy stepped up to the free throw line with under 15 seconds to go and nailed a pair and hushed the crowd by putting her finger to her lips.

“I love those moments,” Murphy said. “I know I’m supposed to hit free throws. My parents and coaches always tell me that they are free for a reason so I stayed confident.

The Grangers missed a pivotal free throw with 54.2 seconds on the clock that would have tied the game at 39 but it was not to be for the Grangers.

LaGrange fell to 5-11 overall and 2-4 in region play to fall to seventh in the region standings. This is the second straight region game the Grangers have lost heartbreakingly on free throws in  the final minute of the game. The Grangers will be back on the court on Friday when they take on North Clayton at home.

Troup is back at .500 overall (7-7) and 2-2 in region play. The win saw the Tigers jump from seventh in the region standings to fourth. Troup will host Trinity Christian on Friday.

“This was a hostile environment and we did not quit,” Thornton said. “We stayed mentally focused and played until the final buzzer. We had a lot of positives we can take forward from tonight.”