More information released on two tornadoes that hit Troup County, one with wind speeds up to 120 MPH 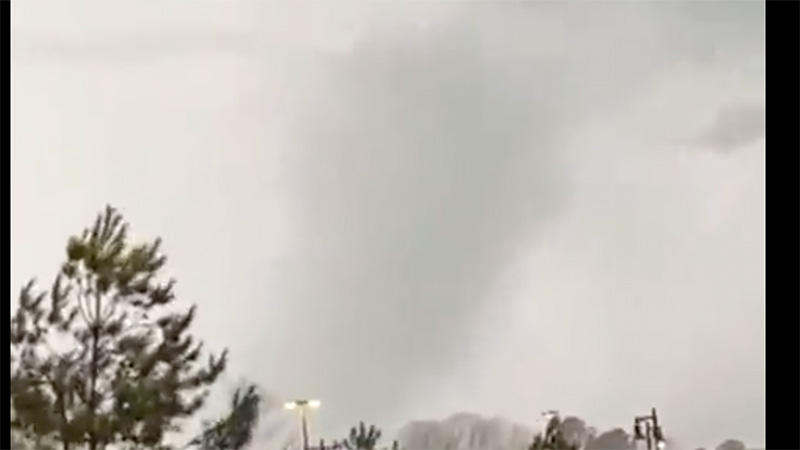 The National Weather Service (NWS) in Peachtree City has released survey information on the tornado that ripped through the Baldwin Park community in LaGrange.

NWS Meteorologist Ryan Willis said that both of the tornadoes in Troup County were categorized as EF-2. Willis said only the tornado in Griffin reached EF-3.

According to the NWS, the tornado hit peak wind speeds of up to 120 mph, making it an EF-2 tornado. The tornado traveled 12.3 miles with a maximum width of 1,060 yards.

The tornado formed from a parent supercell from Chambers County on Thursday, Jan. 12 around 3:34 p.m. and touched down just south of Callaway Airport in LaGrange.

The twister then began snapping trees along Pegasus Pkwy. as it approached Whitesville Rd. where it damaged the roofs, garages, and windows on several single-story metal buildings.

Several power poles were broken along Orchard Hill Rd, where the tornado continued northeast toward the Vaughan Xpress transportation facility, which sustained significant

damage. About a quarter of the large warehouse was destroyed with several bolt anchors stretched or ripped up out of the concrete pad.

The tornado crossed Interstate 85 and continued to the Baldwin Park community, where more than 30 homes had significant damage.

Many one and two-story homes lost major parts of their roof and upper levels floors throughout the community, including at least one partial collapse of exterior walls.

After exiting the subdivision, the tornado continued east-northeast across Upper Big Springs Rd., I-185 and Stewart Rd., primarily through rural, wooded areas. The tornado then continued through Mountville, snapping and uprooting trees along Trippe St., College St. and Wood Rd. where the damage ended.

The tornado lifted just before hitting the Meriwether County line.

No fatalities were reported as a result of the tornado, but four people were hospitalized for non-life-threatening injuries.

NWS meteorologists say the first tornado that hit northwest Troup County started in northeastern Chambers County and was also an EF-2 storm. Although both tornadoes shared the same category, the first tornado did far less structural damage in Troup County. It also traveled further, about 20.9 miles, and had a larger maximum width of 1600 yards.

No injuries were reported from the northwest Troup tornado.

The tornado is believed to have started around Five Points, Alabama near County Road 114 west of Highway 431. The tornado intensified northeast of Five Points, damaging the roof of a barn and at least one residence before completely destroying an unoccupied manufactured home.

According to NWS, most of the structural damage from this tornado occurred along County Road 284 in Alabama. Multiple residences suffered significant shingle or siding damage. Another manufactured home had its porch ripped off and walls damaged and a third manufactured building was blown off its footings.

When the tornado crossed into Georgia, it continued to snap trees along West Point Lake and the North State Line Rd. area. The tornado then crossed the lake and began to weaken as it neared Deer Point Rd. and Rock Mills Rd. where there was minor damage to some homes.

The tornado then continued east through mostly wooded areas and dissipated near Cameron Mill Rd.