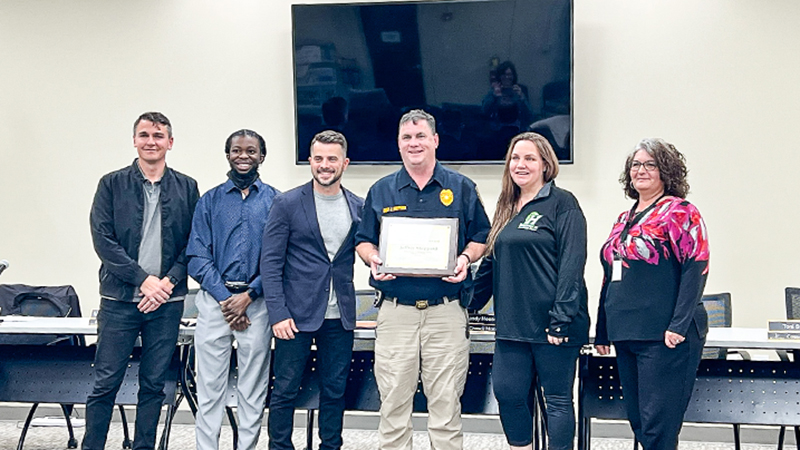 Sheppard, who began serving Hogansville in Jan 2008, has had a long career dedicated to serving the people of Hogansville.

“It’s 15 years of hard work,” Sheppard said. “I started here at the bottom and worked my way up, and it shows that if you’re persistent and do a good job you can work your way up.”

Before beginning his career in law enforcement, Sheppard served in the U.S. Army, worked as a Troup EMS and a firefighter with Coweta County.

“We are very thankful to have Chief Sheppard with us,” Interim City Manager Lisa Kelly said. “We are very appreciative of all that he does and the dedication he has shown for this community.”

Hogansville Mayor Jake Ayers said Sheppard has proven himself to be very dedicated to the city of Hogansville.

“I believe in giving honor where honor is due,” Ayers said. “He has time spent here and has done a great job of getting our department in a good place where it’s in a healthy manner moving forward.”

In his 15 years of service, Sheppard said there have been multiple moments that have been impactful to his career, but there are two that stand out the most.

Sheppard said those two moments are when when then-Chief Moses Ector promoted him to investigator and recently when officers and staff members came together to mourn the loss of one of their own.

“Chief Ector told me he saw great potential in me and was willing to give me a chance and expected my best effort. That set me on the path that brought me to where I am today,” Sheppard said.

“Being able to witness the true comradery between our officers and staff together as a family during the tragic loss of Officer Niki Starnes was a big one. The outpouring of condolence and respect we received from our community, and our law enforcement family across the state showed that we are a part of something great. Seeing all of this and how everyone came together in support of us is something I will never forget.”

Sheppard thanked his wife, Amy Sheppard, and his team at the police station for the large role they play in his 15 years.

“I had a lot of support and there’s no way I can be where I’m at without my wife — without my staff, doing what they do,” Sheppard said. “We have a really good staff at the police department and within the city. It’s an honor to have served the citizens for 15 years.”