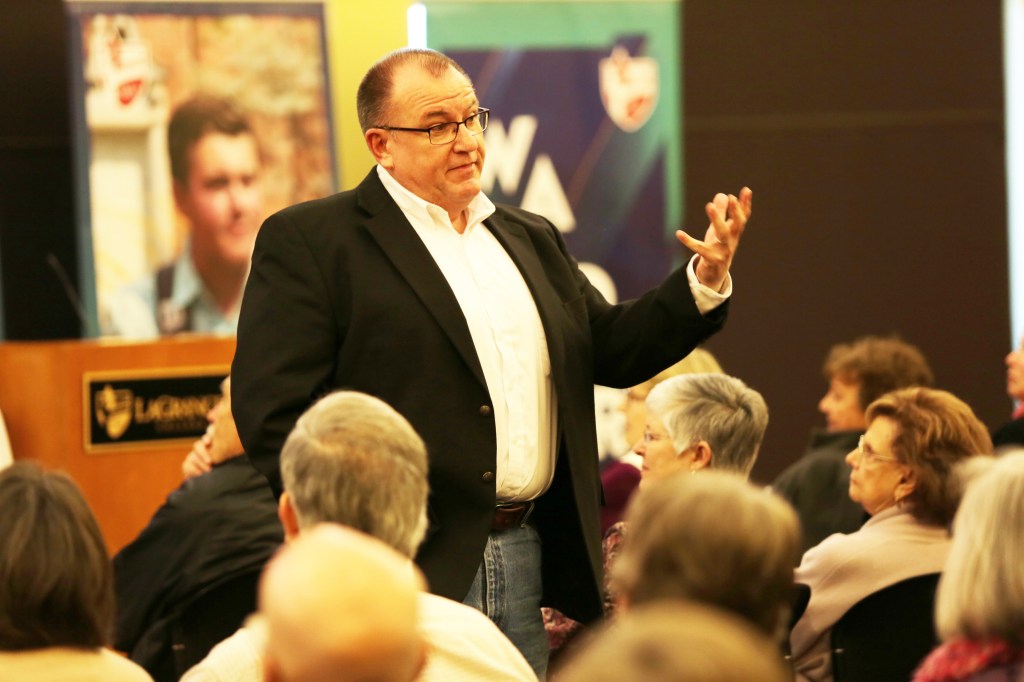 “History seems alive because history is alive!” he said. “It’s a living, breathing thing. History is constantly being rewritten by new excavations, new discoveries and new translations. That’s the appeal of the discipline.”

He aims to demonstrate that “aliveness” as kickoff speaker for 3D Journeys, LaGrange College’s travel and lecture series which begins its 13th season on Monday, Jan. 23, at 10 a.m., in Callaway Auditorium. The 2023 lectures will focus on Tuscany, the spectacularly beautiful Italian region known as the birthplace of the Renaissance. An optional May trip to Tuscany will be hosted by President Susanna Baxter and First Gentleman Mark Huffman.

Dr. Shirley said his goal for the opening lecture is to “set the table,” for Feb. 27 and March 27 presentations by retired LaGrange College professors John Lawrence (art) and Dr. Nina Dulin-Mallory (literature).

Rather than Roman or Renaissance history or his academic specialty, Medieval history, Dr. Shirley chose to go much further back for his topic. He’ll be discussing the Etruscans, whose civilization flourished in central Italy between the 8th and 3rd centuries BCE, when they were overcome by the Romans.

“Everybody knows about Rome and the cultural high points of the Renaissance, but those periods didn’t pop out of thin air,” he explained. “We tend not to fully appreciate how important the Etruscans were. The ancient roots in the region the Romans called Etruria were very important to the development of Rome and influential on classical Rome.”

Etruscan kings, for example, were the “platform” for Roman dynasties and the fabled Roman gladiatorial games had Etruscan roots.

The Etruscans are a vivid example of what Dr. Shirley means when he says new discoveries keep rewriting history. Much of Etruscan history was obliterated or assimilated by the Romans, but advances in research, scholarship and archaeology have brought new information to light, he said.

“For years, what we knew about Etruscan culture was what was excavated at burial sites, but recently much more work has been done, giving us a much deeper and fuller understanding,” he said.

Dr. Shirley’s passion for the past dates to his boyhood, when the works of J.R.R. Tolkien captured his imagination and ignited his interest in the Middle Ages.

He earned both master’s and doctoral degrees at Florida State and came to LaGrange College in the fall of 1998, shortly after receiving his Ph.D. He and his wife, Denise, a Troup County teacher, raised four children here and are now grandparents of two.

This year’s lecture will be Dr. Shirley’s fourth appearance on the 3D lineup. He previously helped set the stage for studies of Ireland, Croatia and Morocco. Veteran lecture goers know to expect a lively, informative and thought-provoking session.

The college’s 3D program was conceived as a way to forge deeper and stronger ties with the community by bringing “lifelong learners” to the campus to “discuss, discover and develop” through lectures and optional travel. All sessions are free and open to “armchair travelers” and “passport travelers” alike.

“We are delighted to welcome LaGrange College’s friends, both new and old, back to campus for our 13th series of stimulating and entertaining lectures,” said Ann Beason, who co-chairs the 3D volunteer committee with Lauranne Buchanan.  “This ‘Taste of Tuscany’ series promises to be one of our best, and we are confident you will find yourself engaged by the marvelous professors.”

Dr. Shirley agrees that it’s important for college and community to be engaged with each other.

“We need to be connected,” he said. “If 3D helps do that, great. It’s more than a gift to the community. It’s a bridge.”

This season’s presentations will be available to view on the college’s YouTube channel by the Friday following each lecture.