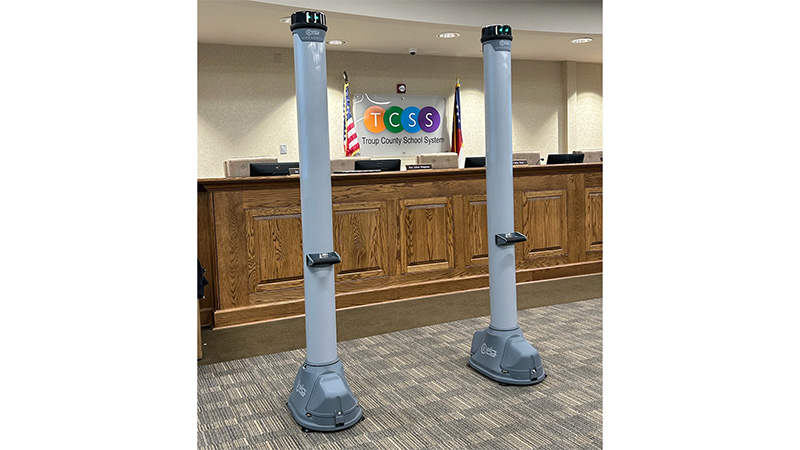 The Troup County School Board approved the purchase of a walkthrough weapons detection system at Thursday night’s school board meeting.

During Tuesday night’s work session, the board was presented information from GXC Inc. about the Ceia Opengate Weapons detection system. On Thursday, the school board approved the purchase of 18 units — which would put multiple units at each middle and high school — at a total cost was $323,116. When TCSS first considered purchasing metal detectors, the price tag was expected to be somewhere in the $1.5 million range.

The Opengate unit has two towers, which sit approximately 34 to 36 inches apart. They can operate by being plugged directly into the wall or by running off of batteries — two in each unit. The battery option makes them portable, meaning they could be moved easily to a new part of the school or used in a gymnasium or Callaway Stadium.

The batteries charge in about an hour and can last anywhere from 10 to 14 hours and each unit holds two batteries. When one battery dies, Hemplfing said the second battery takes over.

“It doesn’t have the crossbars, and it doesn’t give you that institutionalized look of traditional screening like a TSA checkpoint,” Hemplfing said. “It’s really easy to use. You can move it, you can take it out to the athletic field, you can take it to the gym for sporting events. It’s not fixedto the ground.”

On Tuesday, Hempfling walked through the system with a belt and phone on, as well as backpack full of a large metal cup, a laptop charger, iPhone charger, sunglasses, two sets of keys and another cell phone and the system did not go off.

“It’s important to space them out a little bit,” Hempfling said of how quick traffic can go through the unit. “As soon as a student clears, the next student can walk through.”

Heaton said with this system, if there’s concern somewhere in a school that a gun was missed, these systems could be moved to a new location in the building, set up within minutes and have those students walk back through.

Some of the 18 units will be double units. Heaton said they will also be purchasing wands, so if the detector does pick up something, students can be double-checked quickly.

Hempfling said hundreds of students can move through quickly, using an example from a school in Louisiana. He said with three sets of the Opengates that school was able to get 1500 students through in 40 minutes, and that school had never screened before and only had staff members and GXC staff for monitoring.

Heaton said units could arrive in six to 12 weeks.

Hempfling said they come with a two-year manufacturer warranty and firmware support is three years.

Hempfling said then GXC staff is going to spend two days with school staff to ensure everything is set up and running smoothly.

The units are not connected to the internet, so any firmware updates would be through Bluetooth.

Superintendent Brian Shumate said there’s also $500,000 earmarked for additional staff to monitor the units. Heaton said after the meeting that approximately 10 security officers will be hired with that funding.

“That’s going to take some time to fill. We want to have a specially trained security staff, with at least one person, if not two, in the high schools that say special shirts like TCSS security, wear a radio, and they work these all day long and have a wand with them,” Shumate said Tuesday. “In the morning, we’d use additional staff to man the other two or three, whatever [number of units] is at the school.”

Shumate said the idea is to roll this out in at least one high school this spring and the middle schools in the fall.

“It’s not all going to happen overnight,” Shumate said.

The Troup County Career Center and Hope Academy already have more of an “old-school” metal detector, noting both have less students, so there’s not a need for an Opengate system there.