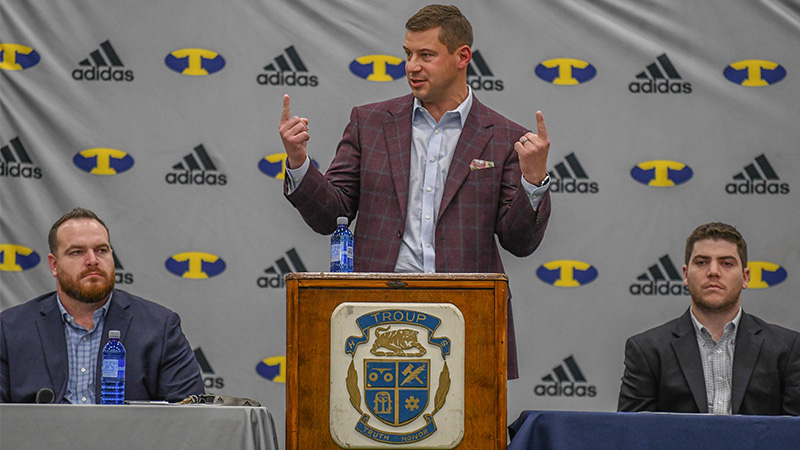 Wednesday was a treat for the Troup football team in more ways than one. The Tigers hosted their end of season award banquets in the indoor facility, and it served as a chance to take a step back and reminisce on one of the most successful — if not the most successful —  season in Troup history.

“We had a great season,” head coach Tanner Glisson said. “Before we got here, the most wins Troup had in a season was 11 wins and now we’ve won 12 twice. We won the first region championship in 35 years and made the third semi-finals in Troup football history. We have unfinished business. We want to win the whole thing and figure out a way to beat Benedictine.”

Awards were handed out but the Tigers also got a chance to hear from guest speaker Jon Sumrall — the head coach of Troy University — who shared some advice and words of wisdom to the young ball players.

“So what, now what? You guys had a great year. That’s awesome, but it’s over,” Sumrall said. “You can look back on last year with pride, but it’s over. I told my team a few weeks ago that we were conference champions and bowl champions, that we went 7-0 at home and finished in the top 25 in every major poll … Understand that the guys that are returning are already investing in having a great 2023.”

Sumrall just wrapped up his first year in charge of the Trojans football team and led them to a 12-2 record and captured the Sun Belt Championship. Under his leadership, the Trojans finished ranked no. 19 in the final AP poll — the first time they have finished the season ranked since they started playing in Division I-A, the highest level of college football.

This was a chance for the Tigers to soak in wisdom from a coach making waves at the next level, a place where many of the players sitting in the room want to be.

“Football matters here and that’s not hard to figure out,” Sumrall said. “Just look around you, this does not happen at every high school. I feel like there are a lot of similarities between Troy and Troup County High School.”

It was not all about dispensing advice, the awards handed out were well earned by the players. The usual letters and bars for letterman jackets were handed out, but there were some awards that had a special meaning.

One of these awards is the William “Bill” Schlomer Big Heart Award — named after a long serving bus driver for the football team — was handed out to athletic trainer Marty McCann, who went through his first football season with Troup in 2022.

“You don’t understand the time and effort he puts into these young guys but they know,” Coach Stan Brumbeloe said. “He’s a very valuable member of our athletic staff here.”

Well respected within the entire program, McCann was the only person to get a standing ovation on the night.

Another award that highlighted an individual that operates behind the scenes was the Unsung Hero Award. Athletic Director Andrew Calhoun started the award a couple of years ago to honor those whose work often goes unnoticed.

The Tigers program had one such kid a few years ago that edited their highlight videos and eventually earned a scholarship to Reinhardt University.

This year’s recipient Jonah Davis elevated the program in a similar manner. He helped produce and edit highlight packages for the entire team.

“He was our main video guy,” Calhoun said. “When you saw those awesome highlights and replays on the video board, he was the one doing them.”

The banquet concluded with the coaching staff and fellow players honoring the seniors that suited up for the Tigers for the final time.