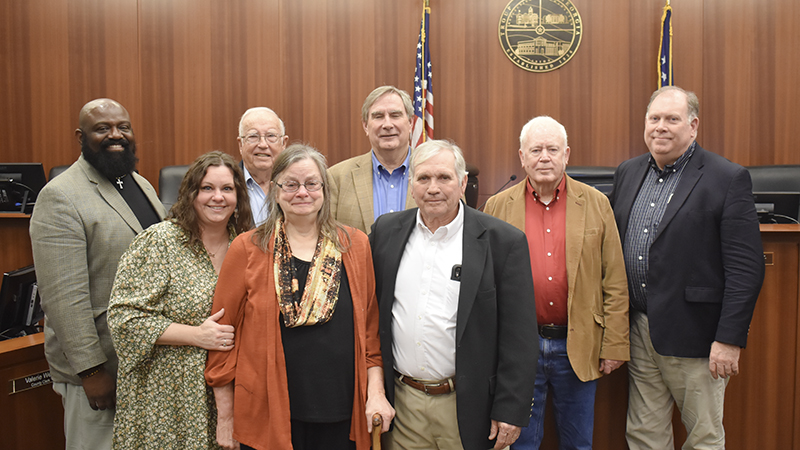 The Troup County Board of Commissioners renamed the Whitfield Fire Station after former Commissioner Buck Davis. His wife Deborah and daughter Lindsey were in attendance when the change was made. Tommy Murphy | Daily News

On Tuesday evening, the Troup County Board of Commissioners voted to rename the fire station on Whitfield Rd. in honor of the late commissioner Robert “Buck” Davis.

“Buck was a really, really good man. He was a good commissioner. He was good for this county,” said Commissioner Ellis Cadenhead, a longtime friend of Davis.

Commissioner Morris Jones echoed those sentiments, saying he served 12 years with Davis on the Board of Commissioners.

Buck’s wife Deborah and daughter Lindsey were in attendance at the meeting when the fire station was officially renamed. The change was unanimously approved by the board.

“He would be proud,” Deborah said, “He loved this job.”

“You know we thought the world of him,” said Commissioner Lewis Davis, as Deborah fought back tears struggling to speak.

The longtime commissioner owned Buck’s Trucking for many years and retired as a Troup County Commissioner in 2016 after serving for 20 years.

Commissioner Cadenhead said he approached Davis during his fourth term, telling him he was thinking about running against him.

“He told me if you’ll let me run one more term, I’ll let you have it,” Cadenhead said.

True to his word, Davis retired after his fifth term and Cadenhead was elected to his District 2 seat.