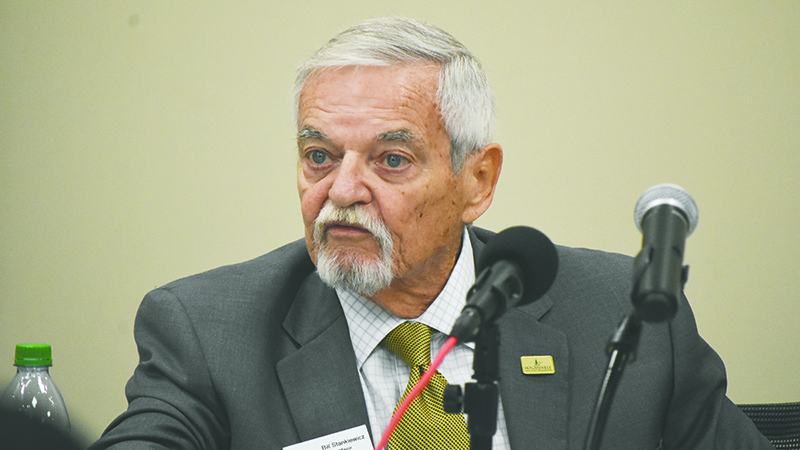 The two-term mayor was loved by his colleagues throughout the county and helped reestablish the City of Hogansville’s finances during a time of instability.

Hogansville Interim City Manager Lisa Kelly said she worked with Stankiewicz the whole time he was city manager and later as mayor.

Stankiewicz was later elected mayor in 2013 and served two terms through 2021.

Kelly said Stankiewicz worked to improve the city even before he became city manager.

“We worked for many years to get our credit rating up so that we could refinance or bonds. During his tenure as mayor, that actually happened. He was very proud of that,” Kelly said.

Kelly said Stankiewicz was also really proud of helping get city hall out of its previous home in the Royal Theater so that it could be renovated and reopened. Stankiewicz was instrumental in relocating city hall to its new location in the former PNC bank, she said.

“His work on the Charitable Trust has made it possible for [the new] City Hall to be funded without any taxpayer dollars being spent,” Kelly said.

Kelly said Stankiewicz’s dedication to Hogansville was clear during her decade-plus working with the former mayor.

“He was so dedicated to wrapping his head around everything that went on in this city, from police operations, down to the minor, little things like how a ticket works, and then electrical operations within the city. He was just he was a sponge. He just he wanted all the information he could get, so he would know what he was talking about,” Kelly said.

“I always said, he should have been on Jeopardy. He would have won millions. He was a smart guy,” she said.

Former Hogansville City Councilman George Bailey said when he was first elected to the council Stankiewicz was serving as city manager, and he was later elected mayor.

Bailey said Stankiewicz served all of Troup County, not just Hogansville. He said he served with Stankiewicz on numerous boards and community organizations such as the LaGrange-Troup County Chamber of Commerce, the Racial Trustbuilding Initiative and the Joint Authority Board with Meriwether County.

“He’s certainly going to be missed in Hogansville and Troup County,” Bailey said.

Troup County Commission Chairman Patrick Crews and West Point Mayor Steve Tramell both said Stankiewicz was a pleasure to work with because he was quick to offer a funny story. All three mayors and the commission chair would frequently get together for meal to discuss what was going on with their respective cities.

“Every time I got to be with Bill it was fun because he always had a funny story or some crazy euphemism or colloquialism that he would say,” Tramell said. “He was just an unending font of information. He was just a great guy. It’s just such a sad loss for Troup County.”

“He was always very entertaining, a very intriguing fellow, when we’d get together. There was a period of time in there in which we had a lot of lunches with the mayors, myself and Bill, and he always had a colorful story to tell us,” Crews said.

“I appreciate the fact that he and Mary were so involved, particularly in Hogansville. They really worked hard to improve the community with all the civic work they did for Hogansville,” Crews said. “Not only was he involved in Hogansville, but he was a presence in LaGrange.”

“I really appreciate his dedication to Hogansville and all the things he did and his wife Mary too. My heart goes out to them,” Tramell said.

“He will be sorely missed. I know they love Hogansville,” Crews said.

Kelly said funeral arrangements for Stankiewicz are being handled by Claude A. McKibben and Sons Funeral Home.