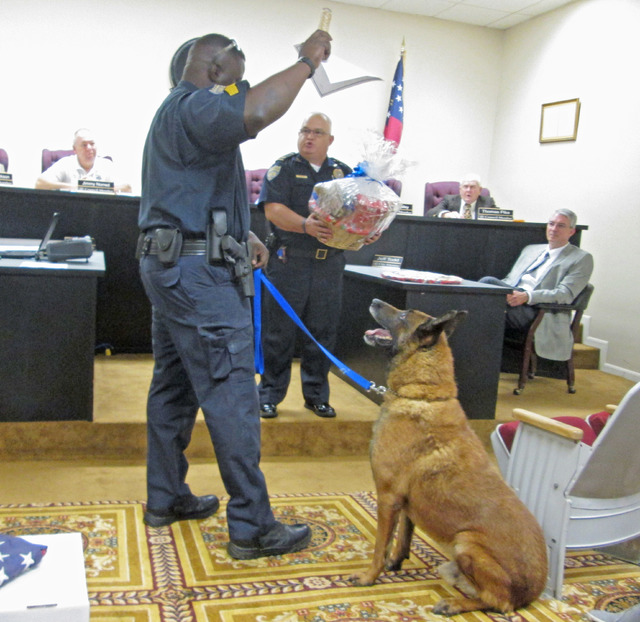 Sgt. Raymond Gates, left, and Chief Brian Harr present K9 Officer Danny of the Hogansville Police Department with a gift basket full of treats and chew toys during Danny’s retirement ceremony at City Hall on Monday. During his seven years in service, Danny accounted for over 250 documented narcotics arrests and at least $5 million in seized drug money.

http://lagrangenews.com/wp-content/uploads/sites/37/2015/07/web1_WEB0723OfficerDanny2.jpgSgt. Raymond Gates, left, and Chief Brian Harr present K9 Officer Danny of the Hogansville Police Department with a gift basket full of treats and chew toys during Danny’s retirement ceremony at City Hall on Monday. During his seven years in service, Danny accounted for over 250 documented narcotics arrests and at least $5 million in seized drug money.

HOGANSVILLE — Before Officer Danny came along, the Hogansville Police Department would spend hours searching a home or vehicle for illegal narcotics. Officers would look inside every nook and cranny searching for illicit drugs. When Officer Danny arrived at the scene, he was often able to locate a stash in under 10 minutes.

During his career, Danny accounted for over 250 documented narcotics cases and at least $5 million in narcotics seizures. To accomplish this feat in just seven years would be nearly unheard of for a normal officer, but Danny is a K9 officer who managed to rack up those numbers in 49 dog years of service.

Sgt. Raymond Gates took sole ownership of Danny since the K9’s retirement ceremony from the Hogansville Police Department on Monday night. Police Chief Brian Harr delivered a formal retirement address to Danny during a City Council meeting where he was presented with a basket full of chew toys and doggie treats.

“I now authorize you to keep your house, kennel and all squeaky and rope toys,” said Harr. “You also must remain with Sgt. Raymond Gates for the rest of your natural life.”

Danny is now 8 years old and has been one of only two K9 officers within the Hogansville Police Department for the last seven years. Hogansville’s police department acquired him from Fort Hood military base in Texas.

“He’s what we refer to as a million-dollar dog because of his service to our department,” said Gates. “He has accounted for over 80 percent of all currency that we have seized in the last seven years, which is at least $5 million.”

Danny has been with Gates for the past six years. Gates was chosen to be a K9 officer after he began working in drug interdiction in 2005.

“I was chosen to become a K9 officer and work with Danny,” said Gates. “We were having a hard time finding drugs that suspects had hidden in many different situations, so we went and got Danny from Fort Hood. He is an invaluable asset to our police force.”

“He has certainly been useful to us in helping us find narcotics in places that we would likely never locate them,” said Harr. “Without him, we would not have made nearly as many arrests for illegal narcotics possession and sales.”

Harr said that the Hogansville Police Department will need to fill the void left by Danny soon. The city currently has one K9 officer on duty. Harr said that he hopes he can find another dog that is as loyal and skilled at helping the police force.

“We thank you, Danny, for your many years of dedicated service to the community and the people of Hogansville,” said Harr.