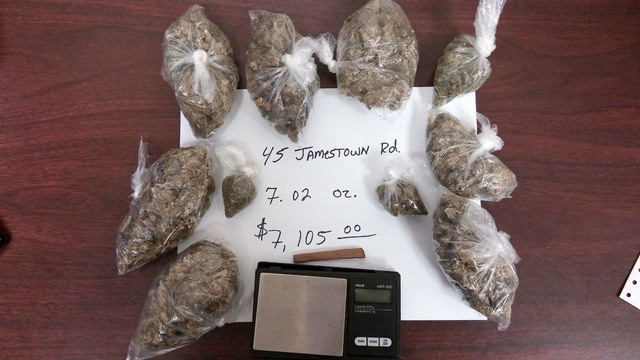 http://lagrangenews.com/wp-content/uploads/sites/37/2015/08/web1_WEB0811Meriwetherdrugs.jpgA photo provided by the Meriwether County Sheriff’s Office shows 7 ounces of alleged marijuana seized during a recent search of a home in Gay. Deputies with the Meriwether County Sheriff’s Office and the Upson Regional Narcotics Task Force executed the search warrant on the home of Donald Alexander, 38, who faces drug charges.

Deputies with the Meriwether County Sheriff’s Office and the Upson Regional Narcotics Task Force found drugs and paraphernalia inside a home in Gay while executing a search warrant.

According to Smith, narcotics agents seized 7 ounces of marijuana and a digital scale.

Alexander was arrested and charged with possession of marijuana with the intent to distribute.

A gas station attendant trying to be a good Samaritan by putting aside a lost wallet instead got taken for a ride by a thief.

A man told LPD he was was paying for an item at the Marathon gas station at the intersection of Lukken Industrial and Whitesville roads Monday afternoon when he accidentally left his wallet on the counter. The man left the store, then realized his wallet was missing and later returned.

According to the report, the store clerk found the wallet and put it aside. Another man then came up, picked up the wallet, claimed it was his, and left the store.

The victim told police his wallet contained a pistol permit, his driver’s license and $120 in cash.

A woman claims someone stole her Apple iPhone 6 after she accidentally left it in a bathroom stall at the Summit gas station at 3124 Hogansville Road.

The woman said she stopped between 11 a.m. and noon Monday at the gas station bathroom. She believed there was another woman in the restroom at the same time, she reported. The victim said she tried to call her cell phone, but it was turned off.

A business located in the 2000 block of West Point Road said someone paid them with a fake $20 bill.

The owner called LPD to report the counterfeit bill on Monday. She told officers that one of her employees took in the $20 bill, but was not sure exactly when it happened.

LPD officers confiscated the fake bill and placed it into evidence.

Dozens join in Journey for Justice march through Troup…