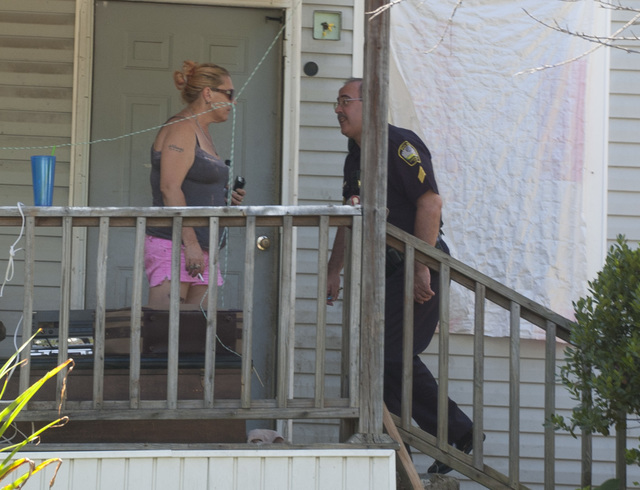 LaGrange police Sgt. Del Armstrong talks to a witness of an alleged cutting incident outside a home in the 200 block of Horace King Street on Wednesday afternoon. Detectives were still investigating the incident this morning.

http://lagrangenews.com/wp-content/uploads/sites/37/2015/08/web1_0813PoliceReports.jpgLaGrange police Sgt. Del Armstrong talks to a witness of an alleged cutting incident outside a home in the 200 block of Horace King Street on Wednesday afternoon. Detectives were still investigating the incident this morning.

A woman alleged she was cut on the arm with a knife while fighting another woman about 4 p.m. Wednesday outside a home in the 200 block of Horace King Street.

The alleged victim told LaGrange police the suspect ran inside a house to hide the weapon after the incident, which started when the two got into an argument and began “tussling” near a barn.

The accused stabber told police the other woman confronted her while she was sitting inside her vehicle and began scratching her face and pulling her hair. She said the victim accused her of stealing.

The fight continued to the backyard, where the victim started to bleed. The accused woman told officers she never went inside the home.

Police canvassed the area and spoke with three witnesses who said they never saw the alleged suspect try to cut or attempt to harm the victim with a knife during the fight.

Detectives were still investigating the incident this morning.

A woman was arrested after she accidentally left her 5-year-old stepson at home alone and he was found wandering the street crying for his parents, according to police.

LaGrange police responded to the call around 9:45 Wednesday morning in the first block of Starmount Drive. Neighbors called police after they found the little boy walking unattended in the roadway, crying loudly for his “mommy” and “daddy.”

The little boy told officers he woke up at his home and could not find his parents. He told the officers where he lived and the name of his mom.

According to the report, officers were able to locate the woman, who was actually the five year old’s stepmother, through 911. She was in West Point, but told 911 officials she was coming directly home, police reported.

The stepmother told officers that she and the 5 year old’s father share a pair of 1-year-old twins. She said she was busy getting them ready that morning and left the house in a rush, forgetting that the little boy had spent the night.

She told officers that she was responsible for watching the child while his father was at work.

After the 5 year old was released to a family member, officers arrested the stepmother and charged her with contributing to the deprivation of a minor.

A 65-year-old man faces multiple charges after being arrested for allegedly driving under the influence of drugs Wednesday near the intersection of O.G. Skinner Driver and Highway 18 in West Point. The driver was charged with DUI, failure to obey a stop sign and driving on the wrong side of the road.

An employee with LaGrange Equipment and Tool Rental on Greenville Street told police someone stole a $2,600 piece of equipment.

The employee called police on Wednesday around 3:30 p.m. after the staff realized a Classen RA-21 Reciprocating Aerator had not been returned by a client and had not been in stock since Monday.