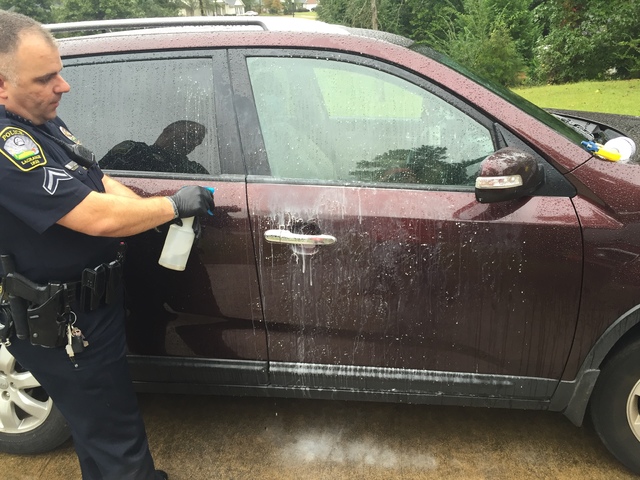 Officer John Slonaker sprays ‘liquid ink’ on the side of a car door to check for fingerprints in the rain. The liquid binds with amino acids from the fingerprints.

http://lagrangenews.com/wp-content/uploads/sites/37/2015/09/web1_WEB0Carbreakins.jpgOfficer John Slonaker sprays ‘liquid ink’ on the side of a car door to check for fingerprints in the rain. The liquid binds with amino acids from the fingerprints.

LaGRANGE — At least seven cars were broken into in the 200 and 300 blocks of Old Pond Road and nearby Woodridge Circle, residents reported Tuesday morning.

The thieves broke in overnight, taking mostly random, small items like change from some unlocked vehicles, said Officer John Slonaker of the LaGrange Police Department at the scene Tuesday. High-value items like navigator systems and stereos were left behind; a purse with debit cards and IDs was stolen from one car.

A report by Slonaker noted that $200 was taken from one vehicle. Several were noted to have been unlocked.

Officers said the thefts most likely occurred between 10 p.m. Monday and 7 a.m. Tuesday.

“This is a very nice neighborhood. This is an anomaly,” said Slonaker. “I’ve worked here 14 years and you don’t normally see stuff like this.”

“We all know each other,” a car owner told Slonaker. “I was crying and upset at first, now I’m just angry.”

Despite the rain, officers used “liquid ink” to spray for fingerprints. The liquid binds with amino acids from the fingerprints.

One car owner said that when she came outside to leave for the day she noticed her car door was slightly open. She said she remembered locking the car.

“Get a job,” said the car owner, as if she was addressing the thief. “You don’t have to rob people, just go clock in.”