Investigators determine cause of Sewon fire 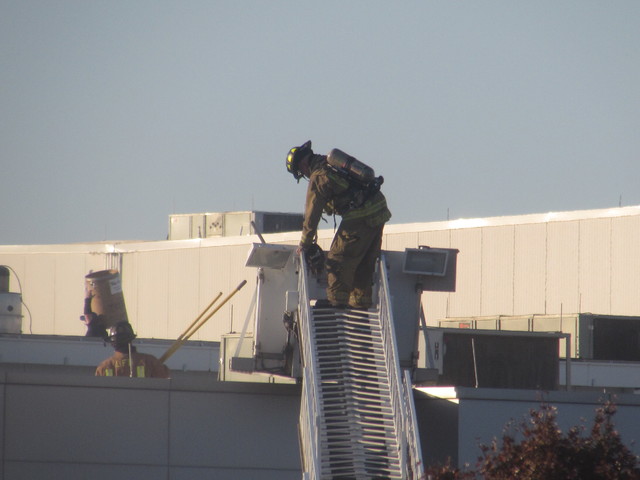 LaGrange firefighters go onto the roof of the Sewon plant to check for damage after fire from an air vent Friday. A portion of area that had been charred by flames after an electrical box malfunction, fire officials announced Monday.

http://lagrangenews.com/wp-content/uploads/sites/37/2015/10/web1_WEB1018SewonFire.jpgLaGrange firefighters go onto the roof of the Sewon plant to check for damage after fire from an air vent Friday. A portion of area that had been charred by flames after an electrical box malfunction, fire officials announced Monday.

LaGrange fire investigators announced Monday they know what caused a small fire to break out at the Sewon manufacturing facility at 1000 Sewon Blvd. around 5:30 p.m. Friday.

Officials determined an electrical box malfunction connected to a ventilation exhaust fan sparked the blaze that sent flames shooting from a small area of the roof. The entire building was evacuated until the fire was extinguished.

According to LaGrange fire officials, most of the flames were put out by Sewon’s safety team prior to the arrival of the fire department.

LaGrange firefighters used their ladder truck to extinguish any hot spots on the roof of the facility and to make sure the fire had not spread any further.

Fire officials said no one was hurt in the blaze or evacuation process.

LaGrange firefighters estimated damage caused by the smoke and flames at about $15,000.

A 14-year-old boy told LaGrange police detectives he was held at gunpoint in a field near the 400 block of Jackson Street on Oct. 18 around 5 p.m. while he and his friends were playing football.

The juvenile told police he saw a black male climb the fence and then fall. He said when he went over to ask him if he was OK, the male pointed a black pistol to his stomach and said, “Give me your money.”

The juvenile said he was able to wrestle the the male off of him and fled to his house.

The teen described the suspect as a light skinned black male, possibly high-school aged, wearing a turquoise sweatshirt with the hood pulled over his face, black jeans and black Air Force Ones.

A playful slap between a mother and son turned into a bigger physical altercation and put one man behind bars.

A woman told LaGrange police Monday, she and her young son were playing at their home in the 100 block of Fendig Street when he slapped her on the rear.

The move angered her boyfriend, who began cursing at her son, the victim stated. The woman said when she told the man to stop cussing at the boy, he punched her in the left eye.

Officers arrested the boyfriend and charged him with battery under the Family Violence Act and cruelty to a child in the third degree.

Some daring vandals threw two large rocks inside the Verizon Wireless store at 1468 Lafayette Parkway around 3 a.m. Tuesday before taking off empty handed.

LaGrange police officers responded to the store in reference to a business alarm and spotted one of the front windows broken. Then they saw the rocks lying on the floor inside the business.

Officers also reported one of the surveillance cameras outside the store appeared to have been tampered with.

According to the store owner, nothing was stolen from the store.