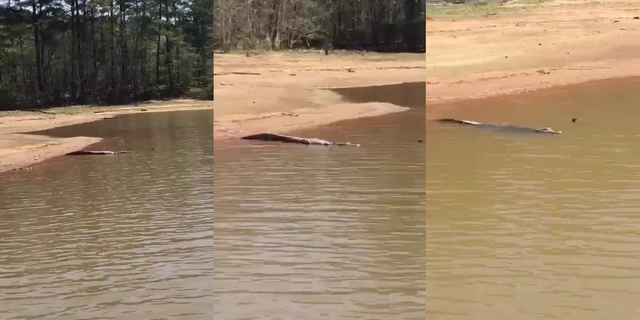 Cody Stahl, left, 18, of Griffin, and Cal Culpepper, 16, of Hamilton, show a cell phone video of an alligator they spotted while fishing in West Point Lake on Tuesday near Wehadkee Creek.

http://lagrangenews.com/wp-content/uploads/sites/37/2016/03/web1_Alligator01-1.jpgCody Stahl, left, 18, of Griffin, and Cal Culpepper, 16, of Hamilton, show a cell phone video of an alligator they spotted while fishing in West Point Lake on Tuesday near Wehadkee Creek.

LaGRANGE — A video shot by a local fisherman this week shows an alligator sunning itself on the banks of West Point Lake before darting into the muddy waters.

Cal Culpepper, a 16 year old from Hamilton, shot the video while he and a friend were fishing Tuesday midday near Wehadkee Creek, a northwestern tributary of the lake.

“We’ve never seen one on West Point,” said Culpepper, who was visiting his grandmother in LaGrange for spring break. “I live on Lake Harding, and we see them a decent bit — not a whole lot, but a couple times a year — but never on West Point, so this is kind of a surprise for me.”

For about a minute, the video shows the fishermen’s boat glide quietly closer to the still alligator at the shoreline.

“Dude, he’s letting us get pretty close,” one fisherman says.

As the boat drifts near, the alligator slowly slides into the water before dipping its head and flipping its tail as it suddenly bounds beneath the murky waves and disappears.

“Below the fall line, which runs between Columbus and Augusta, is their natural boundary of where they should be,” he said. “But they can easily cross over the line. It actually happens quite a bit.”

There are several reasons an alligator might head north of its normal habitat, Clark said.

“Maybe where they were, the habitat changed and wasn’t sufficient to support them,” he said. “Males have a set territory that they patrol, and if a smaller male comes in, they’ll try to kill it and scare it away.”

He explained male alligators are aggressive toward other males when competing for the same turf. It can lead to a battle for dominance, or the smaller alligator — like the one in the video, which Clark estimated to be about 5 feet — sometimes leaves and finds a new home. Male alligators reach sexual maturity at about 5 feet, Clark said, so it’s possible the animal in the video was a recently matured male that set out on its own. Still, he said, it’s impossible to know if it’s male or female without examining it close up.

Theron Menken, a biologist with the Georgia Department of Natural Resources, said people shouldn’t be afraid of the alligator and it shouldn’t deter them from enjoying West Point Lake.

“It looked probably close to 5 feet long,” Menken said after reviewing the video. “An alligator of that size is going to be eating insects, snakes, fish, turtles — things like that. It’s not going for anything large. Really, they have to be 7 or 8 feet before they’re a danger to humans.”

Both Menken and Clark said it’s important that people do not feed alligators, because it trains them to approach people.

“Alligators in the wild don’t pose a threat to people,” Menken said. “The problems occur when people start feeding them and they become habituated. When they associate food with humans is when the danger occurs, because they think they’re going to get a meal from you.”

“An alligator loses its ability to be wild when people start to feed it,” Clark said. “That’s why it’s illegal to feed them. When you get close, it does what it did in that video — it wants to go in the water and hide.”

This isn’t the first time an alligator has been spotted in West Point Lake, according to Menken, whose DNR district includes Troup County.

On average, there are two or three reports of alligator sightings each summer, and sometimes they’ve been reported as far north as the Chattahoochee River in Franklin, Menken said.

“I’ve seen them around West Point, and they’re native to the Chattahoochee River drainage basin,” he said. “They’re pretty common in Columbus, which is not very far away, but there aren’t too many of them on West Point. Folks aren’t used to seeing them, so they draw attention.”