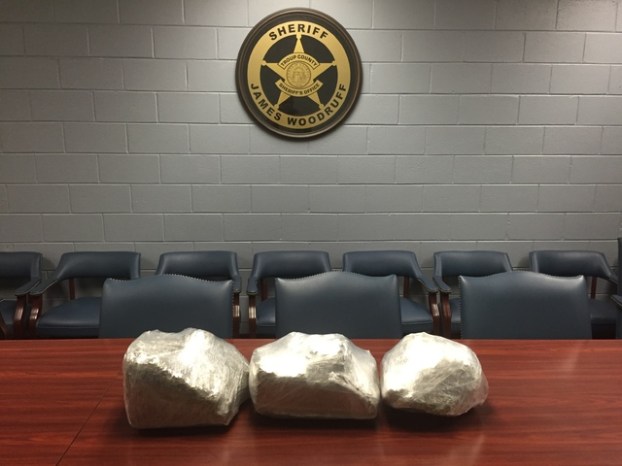 This photo provided by the Troup County Sheriff’s Office shows 25 pounds of marijuana a deputy allegedly found inside a 2016 Dodge Charger while conducting a routine traffic stop on Interstate 85 near Whitesville Road about 8:30 p.m. Tuesday.

http://lagrangenews.com/wp-content/uploads/sites/37/2016/05/web1_IMG_1165.jpgThis photo provided by the Troup County Sheriff’s Office shows 25 pounds of marijuana a deputy allegedly found inside a 2016 Dodge Charger while conducting a routine traffic stop on Interstate 85 near Whitesville Road about 8:30 p.m. Tuesday.

A traffic stop in the southbound lanes of Interstate 85 just after 8:30 p.m. Tuesday ended with a drug bust for deputies with the Troup County Sheriff’s Office.

A deputy stopped a silver 2016 Dodge Charger near mile marker 13 for a traffic violation, officials said. During the stop, the deputy stated he noticed the driver acting suspicious and requested to search the car. The driver consented to the search, according to TCSO officials.

The deputy then allegedly discovered 25 pounds of marijuana.

The driver, identified as Demetrias German, 44, of Montgomery, Alabama, was arrested and charged with trafficking marijuana and failure to maintain lane.

Several neighbors in the 900 block of Georgia Avenue banded together after a man allegedly attempted to burglarize one of their homes Tuesday about 9 a.m.

One of the neighbors told LaGrange police she witnessed the man trying to break into the home across the street and knew his name. She stated the suspect had reportedly broken into many other houses in the area.

Other neighbors stepped forward and also told police they were familiar with the alleged suspect and wanted him banned from the area.

Police informed the homeowners they trespass the man from the area, and if he returned to call 911.

Officers stated they would take the suspect to jail.

A 13-year-old boy was arrested Tuesday afternoon about 3 p.m. in the 900 block of Troup Street after he was caught by a homeowner damaging her car.

The woman told LaGrange police she looked outside and saw the teen riding his bicycle around her truck scratching lines on it. She said he then wrote a curse word on the tailgate.

According to the homeowner, the teen lived in the area.

Police spoke with the youth who allegedly also admitted to scratching the truck.

The teen was taken into custody and charged with criminal trespass.

He was referred to juvenile court.