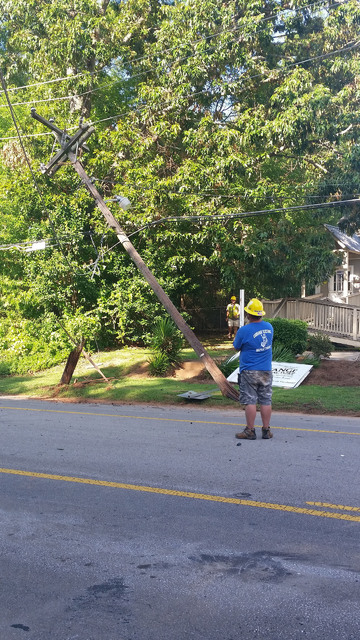 The driver of a car that smashed into a business sign and power pole on North Greenwood Street, causing the road to be shut down for more than an hour and neighborhoods to lose electricity, was arrested by LaGrange police Thursday night.

The man was taken into custody on charges of driving without a valid Georgia license, failure to maintain lane and a seat belt violation, all misdemeanors.

The driver told police a car pulled out in front of his 2016 Dodge Journey from the Shell gas station as he was southbound on North Greenwood Street near Mooty Bridge Road about 5:45 p.m. on Wednesday. The man claimed he lost control of his car, veered off the road, hit a business sign and power pole which then caused the vehicle to flip over several times.

LaGrange police said their investigation showed no evidence the driver attempted to avoid striking the pole. The man also told a Troup County Sheriff’s deputy who stopped to help he was tired at the time of the wreck, said officers. Police believe the driver fell asleep at the wheel.

LaGrange police are looking for suspects in a reported burglary at Spartan Self Storage, 313 New Airport Road.

A renter called police Wednesday afternoon when she discovered someone had cut the lock off her storage unit and taken at least half the items inside. Among the items stolen were a Christmas tree, two Ashley lamps, 10 pictures and several tote bags containing personal items valued at more than $1,490, the report states.

A worker at Mountville Mills called LaGrange police about 3:15 p.m. Wednesday after he noticed someone broke into his unlocked 2002 Dodge Durango. He said thieves stole his debit card, a Revelation 12-gauge shotgun valued at $150 and his lunch.

A woman called police after someone stole several items off the front porch of her home in the 100 block of Poplar Circle while she was gone.

She told LaGrange police officers she only left the residence for an hour and returned to discover several items missing. The items included two Coleman collapsible cloth chairs, an Igloo cooler and a shelf unit among other things.

The value of the stolen furnishing was estimated at about $80.

A city of LaGrange utility worker surveys the damage caused by the driver of the 2016 Dodge Journey who lost control of the vehicle and slammed into the pole Wednesday on North Greenwood Street. LaGrange Police arrested the driver on Thursday.

http://lagrangenews.com/wp-content/uploads/sites/37/2016/07/web1_GreenwoodAx1-1.jpgA city of LaGrange utility worker surveys the damage caused by the driver of the 2016 Dodge Journey who lost control of the vehicle and slammed into the pole Wednesday on North Greenwood Street. LaGrange Police arrested the driver on Thursday.