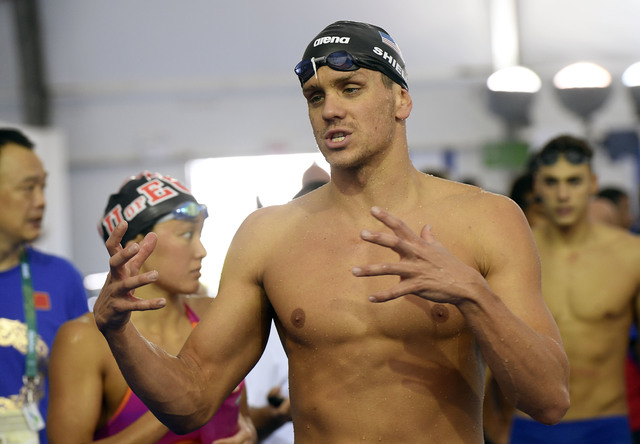 RIO DE JANEIRO — Katie Ledecky is going for a sweep of the longer freestyle races at the Olympics, a feat unmatched since another American teenager achieved it 48 years ago.

If she wins her three individual events and a relay, the 19-year-old Ledecky would take four gold medals back to her Maryland home, equaling the record for a U.S. female swimmer shared by Amy Van Dyken and Missy Franklin.

“She knows it, but it’s not what’s driving her,” said Bruce Gemmell, Ledecky’s coach. “I don’t think it matters to her today. Maybe it will matter to her 20 years from now when she has kids or family to talk to about it.”

Michael Phelps, who knows something about golden hauls, gets started with his fifth and final Olympics on Sunday. The 18-time gold medalist is expected to be part of the men’s 4×100 free relay, with the Americans challenging defending champion France.

The women’s 4×100 relay shapes up as the U.S. versus Australia, which won gold four years ago in London and in 2004. The Americans haven’t stood on the top podium spot since 1996 in Atlanta.

“We definitely want to get it started off right,” said Amanda Weir, who is likely to be part of the relay. “We always come here to win no matter what our record has been in the past.”

Ledecky could help them do that, likely as a swimmer in the preliminaries, which will be held in the afternoon instead of the morning. If the U.S. wins the late-night final, she would get a medal, too.

“Over the years we’ve had a really healthy rivalry,” she said about the United States. “We’ve pushed them and they’ve pushed us. I don’t think America would be where they are today without Australia, and America has pushed us to be the great swimming nation that we are as well.”

Campbell will be joined by her sister Bronte, the 100 free world champion, on the relay.

Sun Yang of China goes for gold in the men’s 400 free on Saturday. He has been an enigma since failing to show for the 1,500 free final at last year’s world championships in Russia. The women’s 400 individual medley is among the four finals on the first night.

The United States and Australia figure to pile up the most medals at the pool.

The Americans won 31 medals, including 16 gold, in London, while Australia won 10 and just one gold. The Aussies have come on strong since then, earning 16 medals with seven golds at last year’s worlds. The Americans weren’t as dominant in Kazan, winning 23 medals and eight golds.

“We really are happy to see our rivals do well, especially on the women’s side,” Weir said. “I think the men get a little more fiery.”

The memories made in Rio will outlast the swimming venue, a 15,443-seat temporary facility featuring 15,000 tiny holes drilled into the structure to give the arena constant air flow. It’s covered in 66 panels designed by a Brazilian artist. Columns in the arena’s four corners will obstruct the views of some fans.