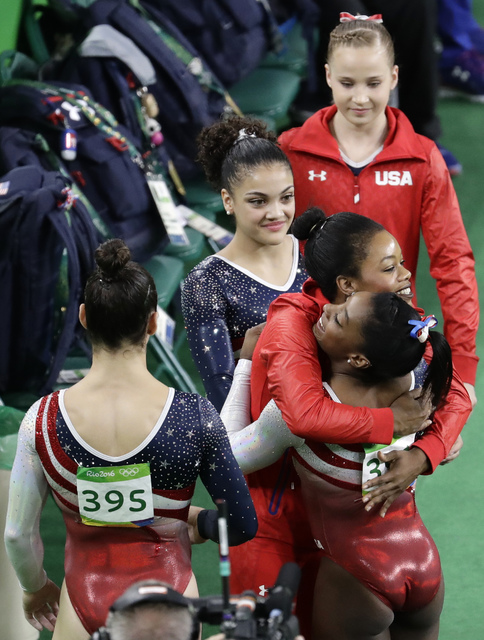 It didn’t matter that the U.S. women’s Olympic gymnastics team had already sewn up the team gold by the time three-time world champion Simone Biles saluted the floor exercise judges during the final event on Tuesday night.

Winning isn’t enough for Karolyi. Never has been. For 90 seconds the longtime national team coordinator leaned one way and then another, following Biles’ every move. Only after Biles’ score was posted — one that served as an exclamation point on two hours of nearly flawless gymnastics — did the architect of a dynasty relax.

Then, something else happened. Something she never saw coming. She started crying. And not just a little.

“I pride normally being very tough,” Karolyi said. “I was ‘Oh, what’s happening to me? What is this?’”

The 73-year-old is stepping away from the program she has spent the last 15 years turning into one of the most dominant forces at the Olympics. Her athletes — all of whom she’s nurtured from prodigies to champions — repaid her hard work with a fitting tribute of precision and tenacity.

Twenty eight times in two days they stepped up to compete. And 28 times they hit. No falls. No major wobbles. Nothing but brilliance.

The U.S. posted a score of 184.897, more than eight points clear of silver medalist Russia and nearly nine more than bronze medalist China while winning its second straight Olympic title and third overall, a margin greater than the one that propelled the “Fierce Five” to victory in London four years ago.

So much for the pressure of being the heavy favorite. The only real mystery surrounded what nickname the team would settle on before Biles stumbled upon it during a group text.

The group — Biles, Aly Raisman, Gabby Douglas, Madison Kocian and Laurie Hernandez — dubbed themselves “The Final Five” as a nod to Karolyi.

Biles admitted there were nerves before Sunday’s preliminaries, though it hardly looked like it while the Americans posted the highest score by more than nine points. The only moment of tension on Tuesday came early. When Hernandez was introduced to the crowd, Raisman nudged her and told her to wave, which the 16-year-old did with a toothy smile.

Barely five minutes later, the youngest member of Team USA was all business. Her double-twisting Yurchenko vault — basically a roundoff onto the block followed by a pair of twists — put the machine in motion. Raisman, who won three medals in London four years ago and seemed to be on the outside looking in as recently as this spring, followed with perhaps the finest vault of her long career. When Biles drilled her Amanar and put up a 15.933 — tied for highest of the night — the U.S. was already on top of the leaderboard and everyone else was playing for second.

It’s a fate the rest of the field seemed to accept. Russian star Aliya Mustafina admitted before the competition the Americans were “unbeatable.” China’s Shang Chunsong said her team “aimed for the silver medal,” a position the Chinese seemed to have in hand until stumbling on the final rotation.

The top spot was never in doubt. The U.S. hasn’t lost a major international competition since 2010 and there appears to be no end in sight to their run even though Karolyi and her husband Bela are selling the training facility on their Texas ranch to USA Gymnastics later this month.

Karolyi joked she’s going to have to be a “normal person” in retirement and plans to poke her head in occasionally to “see if they are going in the right direction.”

At the moment, that direction is up. Way up thanks in part to the semi-centralized system Karolyi installed. Team members and coaches visit the ranch regularly, where they receive specialized instructions. No detail is overlooked. The competition on Tuesday forced the U.S. to wait sometimes 20-30 minutes between sets. No problem. They do that at the ranch all the time.

The retirement party will have to wait. There’s more gold to be won. All five Americans will compete later in the games, starting with Biles and Raisman in the all-around on Thursday. They’ll get Wednesday morning off, then it’s back to work. The job is not done.

“Don’t take anything granted,” Karolyi said. “We want to do the very best all the time.”

A mantra that will live on long after Karolyi takes off her USA Gymnastics sweatsuit for the last time.