Green, not gold, color of the day at Olympic diving pool 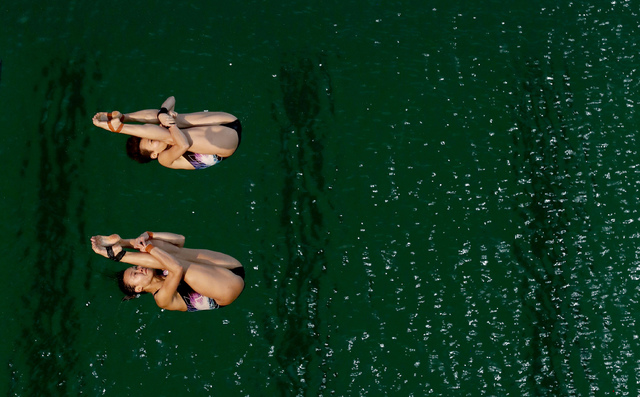 RIO DE JANEIRO — Green, not gold, was the color of the day at the Olympic diving venue.

Sure, China won its third consecutive gold medal on Tuesday, but the buzz was about the color of the water in the diving pool — a murky green.

That was in stark contrast to the pool’s light blue color the previous day and also that of the clear water in the second pool used for the water polo competition at Maria Lenk Aquatic Center.

British diver Tom Daley, who earned bronze in men’s synchronized 10-meter on Monday, tweeted a photo of the two pools next to each other and captioned it, “Ermmm…what happened?!”

Water quality has been a major issue surrounding the Rio de Janeiro Olympics, but in the ocean and lagoons, not the pools.

A statement from Olympic organizers said water tests were conducted and there was no risk to athletes. They couldn’t explain the color change, but said it’s being investigated.

Rio spokesman Mario Andrada said the green was caused “by a proliferation of algae.”

“This was because of heat and a lack of wind,” he said. “We did all the chemical tests. The pool will be blue tomorrow (Wednesday).

“If it were green and yellow, we would know it was a patriotic thing,” Andrada joked, referring to Brazil’s national colors.

Canada team leader Mitch Geller suspected the cause was algae that multiplied quickly in the day’s warm and sunny conditions.

“Everybody was scratching their heads going, ‘What’s going on?’” he said. “I think that the filter is busted, but I’m not sure. It’s not really dangerous. It’s not like it’s toxic or dirty or any of that. It seemed to get worse over the course of the competition.”

The kale-colored water wasn’t just a cosmetic nuisance; it was so dark that divers couldn’t see the bottom of the pool.

“They’re used to seeing the water,” Geller said. “The visuals are really, really important in diving.”

Chen Ruolin, who teamed to win gold with Liu Huixia, said it didn’t affect them.

Paola Espinosa of Mexico, competing in her fourth Olympics, noticed the pool getting increasingly darker throughout the six-round competition. But she said the water didn’t smell or affect her skin.

“I haven’t seen anything like it before,” Espinosa said. “But it’s Brazil and everything is green down here, so maybe it was a decoration to make it look pretty.”

Bronze medalists Meaghan Benfeito and Roseline Filion of Canada tried not to laugh as they gazed at the water from atop the 33-foot tower. They liked that the dark green color offered a helpful contrast with the blue sky.

“The only thing we said is don’t open your mouth in the water, just in case,” Benfeito said.

Geller said a Canadian pool expert was coming in Wednesday and he would offer to help Rio organizers chemically treat the water if there’s a problem with the filter.