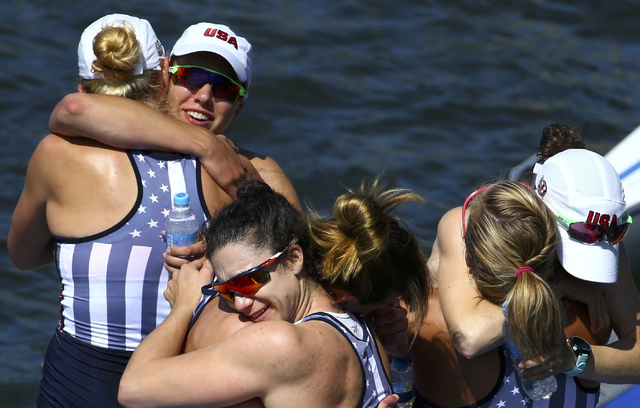 RIO DE JANEIRO — The U.S. boat was in third place halfway through the race when coxswain Katelin Snyder shouted the magic words: “This is the U.S. women’s eight!”

The crew responded and did what it always does: It won.

The U.S. women’s eight is a seemingly invincible boat, with 11 consecutive world and Olympic titles since 2006.

Only two crew members racing Saturday remained from the boat that won gold in the London Olympics, and only one from Beijing four years earlier.

Canada led after the first 1,000 meters of the 2,000-meter race, with the U.S. in third. But when Snyder unleashed her rallying cry, everyone knew what had to happen.

Snyder, always playing down her role as the coxswain — the only person in the boat without oars — said she told the crew to “trust your fitness, and trust the plan and trust your teammates.”

But what about the tradition of the U.S. women’s eight — a dynasty that stands out in team sports?

“I did say that,” she said, bashfully. “I think it was in the third 500 (meters). And everyone was going together. I was going with them and they were going with me.”

Meghan Musnicki, who also rowed the eight in London, said Snyder’s call referred to the entire women’s team, including the rowers who were cut in the fierce competition to make the Olympics.

“It’s an honor to be part of such an amazing group of women and feel like every single one of them is rooting for you and has your back,” Musnicki said.

Tom Terhaar, head coach of the women’s rowing team since 2001, said the big pool of rowers fighting for a spot in the eight helps account for the U.S. success.

“If one has a bad year they don’t make it. Which is hard, but sport is hard,” he said. “Fortunately we’ve been able to figure out the top crew pretty consistently.”

The U.S. crew won the race in 6 minutes, 1.49 seconds. As Canada faded after its aggressive start, Britain took the silver and Romania the bronze.

It was the first U.S. gold medal in the rowing regatta and second overall, after Genevra Stone’s silver in the women’s single sculls.

Britain had never medaled before in the women’s eight. Jessica Eddie, who’s rowed in Britain’s eight since 2005, hopes the silver will inspire younger rowers to challenge the U.S. winning streak.

“I’ve been here getting beaten by the Americans for the past 11 years,” Eddie said. “I hope this will trickle down and that women who will now be coming into the sport for the next four, eight, 12 years can believe they can do it.”

The women’s rowing teams from the United States, left, and Romania celebrate on the dock after winning medals in the women’s eight event at Lagoa in Rio de Janeiro, Brazil, Saturday, Aug. 13, 2016. Romania took the bronze, the United states the gold and Britain the silver. (Jeremy Lee/Pool Photo via AP)

The women’s rowing team from the United States celebrates winning the gold in the women’s eight event at Lagoa during the Summer Olympics in Rio de Janeiro, Brazil, Saturday, Aug. 13, 2016. (Jeremy Lee/Pool Photo via AP)