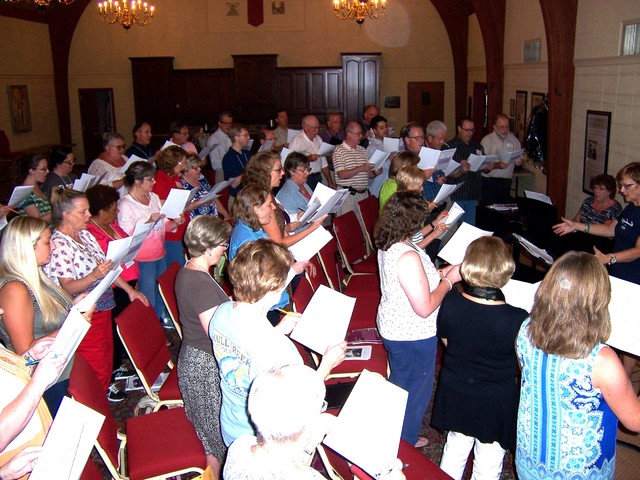 LaGRANGE — A popular choral festival will be bringing hundreds of vocalists together once again on the LaGrange College campus, thanks to a project grant funded by the Georgia Council of the Arts.

“It is quite a significant award,” explained Bettie Biggs, artistic director of the Choral Society of West Georgia. “We are the only choral group in the area to be given a project grant. When I looked through the list of all the winners, I didn’t see a whole lot of community art festivals on there.”

In February, eight different choral societies from around the southwest corner of the state gathered under one roof and lifted their voices for the inaugural festival in LaGrange. Vocalists ranged in age from 8 to 80 and never performed together until that day.

The combined choirs rehearsed that morning and then sang a variety of songs before a packed audience that afternoon in the Callaway Auditorium.

According to Biggs, who also coordinated the event, it was the first volunteer choral festival of its kind in West Georgia.

All the vocalists and musicians’ materials, plus lunch, was paid for by funds given to the Choral Society of West Georgia in 2015. This new grant will provide the same opportunities for the choirs, instrumentalists and instructors who participate in next year’s festival.

“It will help secure the facilities and buy music,” Biggs explained. “We purchase all the music for the collaborative portion of the festival. … We also post it onto the website so the choirs can rehearse independently before they collaborate with the other choirs the day of the festival.”

“Some choirs will be returning, but we will have new groups too. We want to keep the festival fresh and diversified from year to year,” she explained.

The special guest clinician for the 2017 festival will be Byron Cartwright of Point University, Biggs said. Cartwright is head of the university’s Fine Arts Department.

While Biggs is planning ahead for the festival, she is also conducting rehearsals with the Choral Society of West Georgia for the upcoming concert season.

The singers will not be featured for the first performance, said Biggs. Instead, musicians will take center stage for the inaugural “Phantoms of the Organ.” The ‘spooktacular’ event is a collaborative effort with the Downtown Development Authority and will take place after the annual Chili Cook Off and Halloween events on Oct. 29 at First Presbyterian Church on Broad Street in LaGrange.

The concert will feature six local organists and will be fun for the whole family, Biggs said.

“The musicians will play listener-friendly pieces. They’ll be light hearted and fun. One organist will play the theme to ‘The Munsters’ TV show,” she explained. “The musicians may even come out in a cape and a top hat. It’s going to be a fun, seasonal event.

“The organists are so excited,” Biggs continued. “They’re kind of the unsung heroes of our group.”

The singers in the Choral Society of West Georgia will take center stage on Nov. 19 and Nov. 20 for their annual “We Gather Together, a Concert of Praise, Thanksgiving and Remembrance.”

This year, the show will have a folk music theme as the Bonnie Ridge Blue Grass group of Griffin joins the vocalists on stage. The group will perform songs from the movie “O Brother, Where Art Thou?” like “I Am A Man of Constant Sorrow.”

The choir will also perform a special piece composed by LaGrange Police Sgt. Robert Kirby called “Prayer of Serenity.” The music is based on the popular prayer and was written in honor of the daughter of one of Kirby’s college professors. The young girl was killed in a car accident three years ago, said Kirby.

The annual concert will be held in the First Presbyterian Church at 120 Broad St.

Anyone wanting more information on the 2016-2017 Choral Society of West Georgia’s concert season can visit www.cswg.weebly.com.

The Bonnie Ridge Blue Grass music group of Griffin will perform alongside the Choral Society of West Georgia during the society’s annual Thanksgiving concert. The performance will feature songs from the movie ‘O Brother, Where Art Thou?’

http://lagrangenews.com/wp-content/uploads/sites/37/2016/09/web1_0907Choral03.jpgThe Bonnie Ridge Blue Grass music group of Griffin will perform alongside the Choral Society of West Georgia during the society’s annual Thanksgiving concert. The performance will feature songs from the movie ‘O Brother, Where Art Thou?’

Choral Society of West Georgia Artistic Director Bettie Biggs leads the singers during the 2015 ‘We Gather Together, a Concert of Thanksgiving, Praise and Remembrance’ at First United Presbyterian Church.

http://lagrangenews.com/wp-content/uploads/sites/37/2016/09/web1_web0907Choral02-FILE.jpgChoral Society of West Georgia Artistic Director Bettie Biggs leads the singers during the 2015 ‘We Gather Together, a Concert of Thanksgiving, Praise and Remembrance’ at First United Presbyterian Church.

The Choral Society of West Georgia harmonizes together during a rehearsal as they kick off their 2016-2017 concert season.

http://lagrangenews.com/wp-content/uploads/sites/37/2016/09/web1_web0907Choral01.jpgThe Choral Society of West Georgia harmonizes together during a rehearsal as they kick off their 2016-2017 concert season.