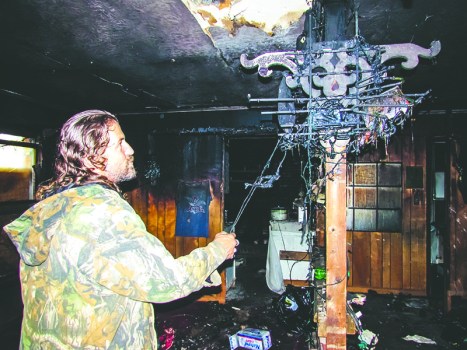 Sean Magdaleno pokes at a sign that hung in the family’s game room. The light up sign completely melted in the blaze, along with most of Sean’s collectible items. (Melanie Ruberti | Daily News) 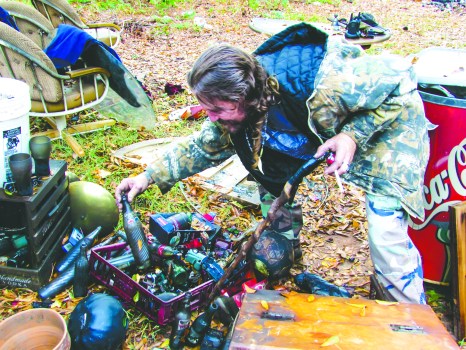 Sean Magdaleno shows off some of his old, collectible bottles stashed in the backyard of his home. Though the bottles were covered with soot, Sean was able to salvage most of them. The bottles were one of the few things that was damaged in the fire on Nov. 7. (Melanie Ruberti | Daily News) 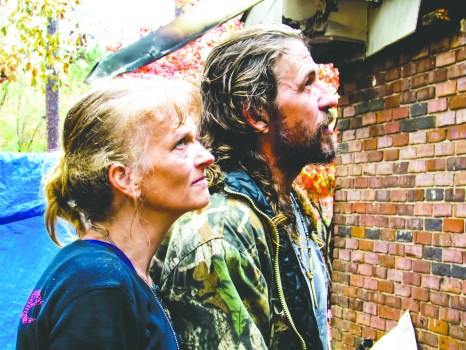 Janie and Sean Magdaleno look at their home in the first block of Pine Hill Road which was damaged in a fire on Nov. 7. The couple and their seven-year-old daughter lost everything in the blaze. They ran out of money and are now living in a shed in their backyard. (Melanie Ruberti | Daily News)

LaGRANGE — Sean and Janie Magdaleno are not expecting many material items this Christmas, but they are praying for one big miracle.

The couple’s home in the first block of Pine Hill Road was heavily damaged in a fire on November 7. Sean, Janie, their daughter, ClaraJean, 7, and two family friends lost everything in the blaze except the clothes on their backs.

“I was half asleep and all of the sudden I heard John (friend) hollering, ‘The house is on fire,’” Janie said. “I went into the living room and there was smoke coming from both sides of the room. I ran to get my phone to call 911 and the smoke got heavier … then I saw flames shooting out.”

Everyone got out of the house safely. Janie said fortunately the fire happened about 9:30 a.m. on Monday while their daughter was at school.

But the couple was forced to watch as the home they cleaned up and renovated for more than two years went up in flames.

“It was horrifying,” Janie remembered. “I can’t even explain it. We ( Sean and Janie) just held each other and cried. We were thankful we were alive and ClaraJean wasn’t here.”

While the outside walls of the residence are still standing, the windows are boarded up and parts of the roof are covered in tarps.

The inside of the house is a dark, smokey maze of charred wood with clumps of melted furniture and items. Ashes still flutter through the air, as does the overwhelming, stinging odor of burnt housing material.

Sean chokes up with tears as he surveys the place he once called home. Janie still has a hard time going inside the house to recover any items.

“I know all those things are material, but the fire also destroyed family pictures, the family bible, my other children’s awards and trophies,” Janie said sadly. “It’s very humbling.”

“Everything’s gone … It’s overwhelming,” stated Sean with tears in his eyes. “Whatever you see outside is all we got.”

A portion of the yard was filled with kitchen and laundry appliances covered in soot, some furniture concealed in tarps to shield it from the rain and a few shirts and pants hanging on a clothesline in the hope of ridding them of an acrid, smoky smell.

To add insult to injury, while the couple was staying at the hotel, someone sneaked onto their property and stole the hot water heater and other items from their burned out home, Sean said.

The couple managed to salvage some items; mainly the objects that were not totally covered in soot or damaged by flames and water, Janie explained.

“I collected hats, old bottles and had a bar table with a ton of signatures on it,” Sean said sadly as he glanced around the burnt out shell of the game room. “I even had a collection of University of Georgia items. People were so jealous.”

A local church gave the family a box of food and references, said Janie.

The American Red Cross helped the family find temporary housing in a hotel for two weeks. Sean paid for a third week, but could not afford to keep the family there.

The house was deemed “uninhabitable” by fire marshals, so the couple sent their daughter to stay with friends while they live in a shed behind their home. There is no electricity and no running water on the property.

Sean is currently suffering from an injury and supposed to be on disability, he said. But he is willing to endure the pain and trying to find some work in the construction industry to support the family.

Right now, the Magdalenos are living paycheck to paycheck, they stated.

“It just seems like everything is stacked against us,” said Janie. “But I learned a long time ago not to ask, ‘Why?’ God has a reason this happened to us … we just don’t know it yet.”

This is the second catastrophy the Magdaleno family has suffered in less than a year.

Last December, the creek behind the couple’s home flooded their property following severe storms that included torrential rains that fell in a short amount of time. The family spent Christmas day in a hotel.

Now, the Magdaleno family may be permanetly displaced from the residence they have called home for two years.

Janie and Sean’s main priority is to find a safe, inexpensive place to live so they can be reunited with their young daughter and live under one roof as a family.

The Magdaleno’s oldest daughter, Destiny, set up a GoFundMe account for her family.

Anyone wanting to donate monetarily can click on this link: https://www.gofundme.com/2xwonis, or go the GoFundMe page and search for “Family’s House Burned Down.”

People can also contact Janie and Sean Magdaleno at 706-412-0536. The couple said text is the best way to reach them.

The fire was ruled accidental, but the cause is still undetermined, said Troup County Deputy Chief Kevin Norred.