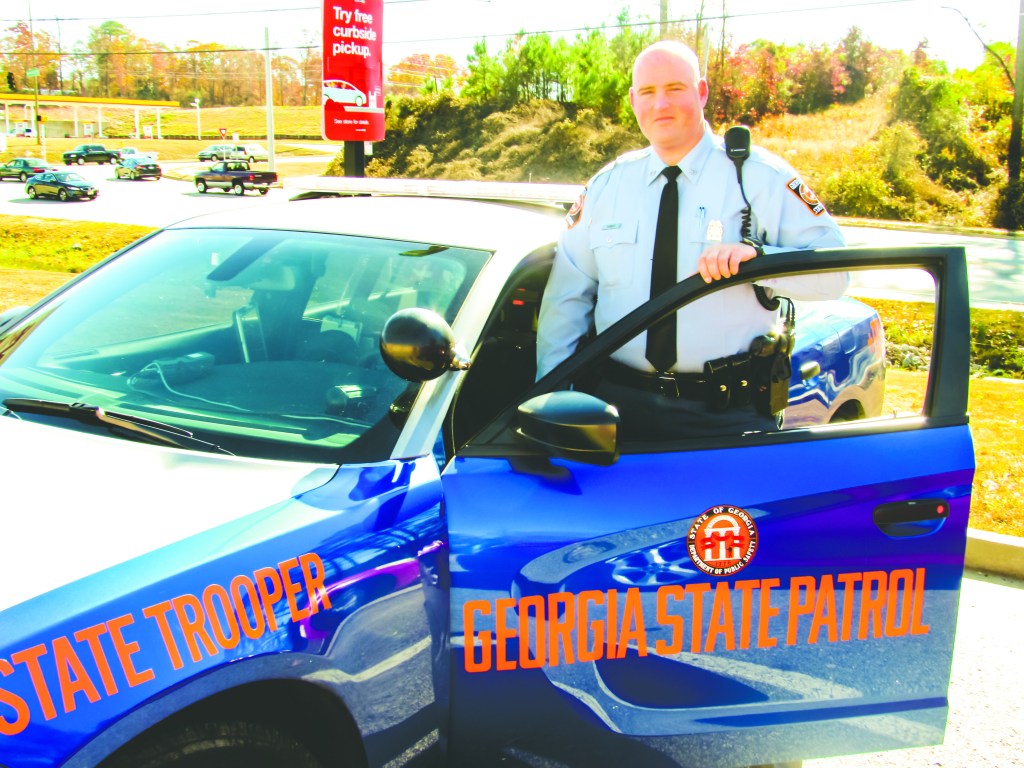 LaGRANGE –  Georgia State Patrol Trooper Brad Turner became a hero Wednesday night to two young children when he spotted the truck used to allegedly kidnap them in the northbound lanes of Interstate 85 in Hogansville.

Just minutes earlier, Turner heard the Amber Alert (Levi’s Call in Georgia) issued for the 10-month-old baby boy and 2-year-old little girl who were taken from a home in Leesburg – a town just north of Albany.

The children were allegedly kidnapped by their mom, Mallory Johnson, 32, and her boyfriend Steven Johnson, 52, Turner said.

The statewide communication center also posted a BOLO (Be on the lookout) for a white, Ford F-150 truck and plate number the Johnson’s and children were riding in, Turner said. Officials believed the couple would be traveling north on I-85 headed for Gainesville, he added.

Turner parked his patrol car in the median of I-85 near the Hogansville exit and started monitoring traffic for the suspect’s truck. Around 8:30 p.m., the trooper spotted the white, Ford truck with a stroller sticking out the back. He said he was confident they were the suspects, but needed confirmation.

“I eased out of the median on I-85 because I didn’t want to spook him (driver). He had already said he would hurt the children,” Turner said. “So I confirmed through running the tag that it was him and I waited for back up.”

Turner kept the truck in his sights until GSP Trooper Joel Puckett from Manchester joined him in the northbound lanes of I-85.

Deputies with the Coweta County Sheriff’s Office and Grantville Police officers waited silently under the cover of darkness in their patrol vehicles in the median near Exit 41 in Coweta County.

As soon as Turner saw the entourage of law enforcement vehicles waiting on him, he hit his blue lights and pulled the truck over.

“My fear was that young kids were involved and he (Steven Johnson) said he would harm them,” Turner stated. “I didn’t want a pursuit to break out … and using a PIT maneuver (precision immobilization technique) was iffy … it would damage the truck and the kids might be hurt.”

Fortunately, Johnson immediately pulled the truck off the side of I-85 near mile marker 47 in Coweta County, said Turner.

“I jumped out with my shotgun and I called for Steven Johnson to step out of the truck,” Turner stated. “He got out and I held him at gunpoint as he backed up to us (law enforcement officers) … I think when I racked my shotgun, he knew this was the real deal.”

GSP Troopers Puckett and Chris Davidson took Mallory Johnson out of the truck and into custody, said Turner.

CCSO deputies quickly moved in to check on the children.

“They were fine,” Turner said with a smile. “They didn’t cry one time.”

“He said he just wanted to spend Christmas with his kids … they were in the custody of the state,” Turner explained. “He (Johnson) stopped at the Ingles in Hogansville to buy the kids toys and treats.”

The trooper said the biggest gift Steven Johnson gave the children this holiday season was safely letting them go.

“He made the smartest decision to not harm those kids and to give himself up,” Turner stated. “We (law enforcement officers) already had our minds made up we weren’t going to let Johnson get out of Coweta County. I prayed as I followed the truck, ‘Lord, please don’t let him harm those kids, run from us or get into a wreck. The children were not buckled in …”

The Coweta County Sheriff’s Office arrested the couple and took them to jail, Turner said.

It was unclear what charges Steven and Mallory Johnson will face as of press time on Thursday.

The children were taken by CCSO deputies to the sheriff’s office. An official with the state Department of Family and Children Services would take custody of the kids from there.

Turner turned the case over to CCSO and the Leesburg Police Department, glad to have done his part to bring the children home.

“I’m glad we got him (Johnson),” he said. “GSP’s goal was making sure the kids were safe.”