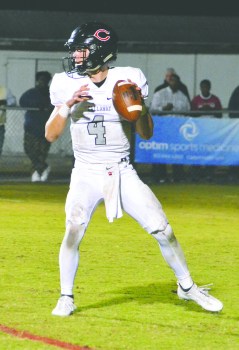 HOGANSVILLE – He was ready for the moment.

With their season on the line last week against Screven County, the Callaway Cavaliers had 98 yards to go for the go-ahead touchdown, and they had a little more than two minutes to make it happen.

The man who was tasked with leading the Cavaliers down the field was quarterback Dylan Johnson, and he had a message for his teammates as they huddled for the first play of what they hoped would be a game-winning drive.

“When I went in the huddle for that last drive, I told them this was it,” Johnson said. “Just do all you can, and don’t have any regrets after the drive is over with.”

There were no regrets.

When Johnson threw a 47-yard touchdown pass to Braylon Sanders with 17 seconds left in the game, Callaway had covered those 98 yards in about two minutes, and they had a one-point lead.

Screven County ran one play before time ran out, and Callaway had the dramatic 35-34 win.

“They came through in the clutch, and everybody did what they were supposed to do,” Johnson said.

It was a special moment for everyone on the team, including a senior quarterback who has had a phenomenal season and career.

Part of Johnson’s success stems from his ability to not let the moment get the best of him.

The pressure was immense as Johnson and his teammates walked onto the field, knowing they had to score a touchdown to keep the season going.

The always-cool Johnson calmly led the Cavaliers down the field, though, making the throws he had to, and even running for a first down on one of the three fourth-down plays on the drive.

“You just have to take it one play at a time,” Johnson said. “No matter the time of the game, or what’s going on, you just have to focus on that play, to make each play successful.”

On the final play of that epic drive, Callaway had the ball at its own 47-yard line, and it was fourth-and-seven.

Sanders is one of the state’s best wide receivers and he has been Johnson’s favorite target all year, but he wasn’t the only option on that play.

One receiver was going deep, and Sanders was running a short crossing pattern.

The deep pattern was covered, and Johnson spotted Sanders pulling away from his defender over the middle.

“I told myself, just throw the ball and he’ll catch it,” Johnson said.

Johnson delivered a strike, and Sanders caught the ball in stride and out-raced Screven’s defenders for the game-winning touchdown.

“It’s something I’ll never forget,” Johnson said. “Nobody on this team will probably ever forget. It’s hard to explain. It’s pretty cool.”

Offensive coordinator Matt Napier said Johnson and everyone did precisely what they were supposed to on that play.

“The other guys did a good job on their routes, too,” Napier said. “The speed of the play was good. Nobody took the play off. Everybody knew what was on the line, and everybody did their job. That’s the beauty of this sport. It takes 11 kids on the field at the same time doing exactly what they’re supposed to do.”

Johnson, as has been the case throughout the season and particularly in the playoffs, was spectacular.

He completed 10-of-17 passes for 269 yards with three touchdowns, two to Sanders and one to DQ Wilkerson.

The week before in a second-round win over Brooks County, Johnson was 10-of-14 for 200 yards, and he tossed a pair of touchdown passes to Sanders.

In a first-round game against Model, Johnson completed 7-of-9 passes for 141 yards, and he threw a school-record five touchdown passes, two to Michael Freeman, two to Sanders, and one to Wilkerson.

Johnson, who is an effective runner and has scored multiple touchdowns on the ground, has also only thrown three interceptions.

“It helps to have the great wide receivers that we have. They’ll get open,” Johnson said. “And even in times where the corners have everything covered, I’ll take off and run. If the play doesn’t open up, the linemen are still blocking their butts off. It makes it easy on me.”

Napier, who has coached some outstanding quarterbacks during his 12-year tenure as Callaway’s offensive coordinator, said Johnson’s character makes him a perfect fit for the position.

“He’s got a never-give-up, never-quit attitude,” Napier said. “No matter what goes wrong, it never phases him. No matter how hard he gets hit, if there’s a mistake he turns around like it didn’t happen. Every great quarterback has got to have that short-term memory. He hasn’t done it much. He’s thrown 25 touchdowns and three interceptions. If there’s a fumble, a misread, he turns around as if it never happened.”

Napier also said Johnson is the ultimate teammate, who always strives to praise those around him.

“He’s so quick to turn around and give everybody else the credit for it,” Napier said. “That really explains everything you need to know about him. You say something positive about him, and he’ll turn around and say the offensive line is blocking, or Braylon is making a catch, or DJ (Atkins) is running, or whatever it may be. He’s going to be quick to give other people the credit. And I think that’s why his teammates follow him. That’s why we can get a deficit and be able to come back from it.

It helps that Johnson has been there a time or two.

His first experience playing quarterback on the varsity level was in 2014 when he stepped in late in the season for the injured Terry Godwin.

With Godwin unable to go in the playoffs that year, Johnson moved to quarterback and helped the team reach the second round.

Sanders was the quarterback at the start of the 2015 season, but when he was injured, it was Johnson once again stepping in.

Johnson was at the helm for a team that beat Central-Carroll to win a region title before advancing to the second round of the state playoffs.

Heading into this season, there was never any doubt who the quarterback would be.

Johnson has taken most of the snaps at quarterback this season, with some other players getting some time on the field in blowout victories.

Johnson has also done an outstanding job as the punter, and he is the holder on extra points and field goals.

During his time at Callaway, Johnson has also been a standout defensive player.

Johnson is one of nine seniors on the team, and most of them have been around since they were freshmen.

Those players are part of a program that has amassed a 42-9 record since 2013, and this is Callaway’s second trip to the final four in four years.

No matter what happens tonight against Benedictine, it has been the best season in the 20-year history of the Callaway football program.

“It’s the dream season,” Johnson said. “You always dream of going 13-0, and being in the final four and having a chance to win a state championship. I had no doubt coming into this year that the guys we had, the seniors, and the underclassmen who’ve played great, that we had a good shot.”