‘Under the Bethlehem Star’ 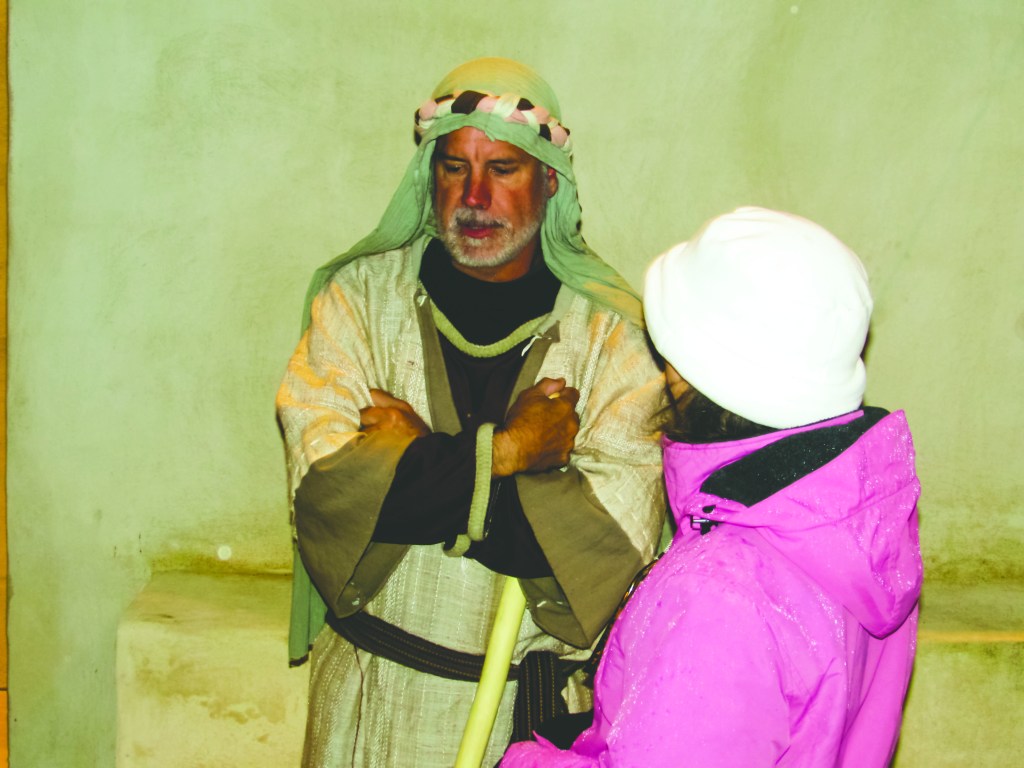 A ‘shepherd’ stops to talk with a participant of the Follow the Shepherds walking tour at the Biblical History Center on Saturday. The walk and multi-media Christmas show is part of a special, annual holiday presentation which follows the journey of Mary and Joseph before, during and after the birth of Jesus. (Photo By: Melanie Ruberti | Daily News)

‘Under the Bethlehem Star’

People retrace the journey of Mary, Joseph and Jesus

LaGRANGE – Dozens of people stepped back in time this weekend to follow the journey of Mary and Joseph in the days leading up to – and shortly after – the birth of Christ.

The adventure was part of the Biblical History Center’s Christmas series titled ‘Under the Bethlehem Star.’

The excursion includes a short walking tour of Mary and Joseph’s journey from Nazareth to Bethlehem called, “Follow the Shepherds” and an interactive media show in the center’s outdoor theater titled, “Two Different Kings.”

“We want to help people understand the actual story surrounding the birth of Jesus,” said Derrick Lewis, chief operating officer of the Biblical History Center. “For instance, there are no facts showing that Mary rode a donkey into Bethlehem. Donkeys were expensive during that time … Mary and Joseph were poor … we know that because when Jesus was circumcised on the eighth day, they (Mary and Joseph) paid with two turtle doves … which was reserved for the poorest of the poor … instead it is more likely Mary, while very pregnant, walked from Nazareth to Bethlehem which is about 90 miles.”

The museum helps people understand the story of Jesus’ birth by showing them firsthand the geographical, historical and political actions of that time, said Lewis.

“We take you through the original, historical context, but then let you translate the information in accordance to your faith,” he stated.

People are guided by shepherds dressed in period costume into realistic displays such as a three room Nazarene home or “cataluma,” plus a version of the area where Jesus was likely born.

“When they (Mary and Joseph) find a place with a manger, it is not a barn structure with animals like most people have come to think of. They go to the edge town and stay in a cave … that’s where she (Mary) gave birth,” Lewis explained. “Ninety percent of mangers in those days were built near a cave, especially in Bethlehem.

“We are not trying to ‘bah humbug’ the circumstances surrounding the birth of Jesus,” Lewis continued. “Instead, we’re showing people the specialness of the story.”

The “Two Different Kings” multi-media event also showcases the birth of Jesus. The show displays the contrasts between the reign of King Herod – a king of “might” – and the life of King Jesus – a king of “right.”

The Follow the Shepherds walking tour and the multi-media Christmas show will take place every Friday and Saturday night in December, including Christmas Eve. Times vary and the cost is $10 for adults; $6 for children. Reservations are recommended.

Anyone wanting more information on the show or to reserve their spot in the journey is asked to contact the Biblical History Center at 706-885-0363.

Follow the Shepherd walks: Every Friday, *Saturday in December

Police on the checkpoint