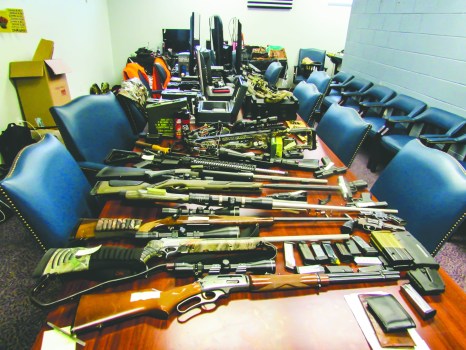 Investigators with the Troup County Sheriff's Office seized an estimated $75,000 worth of stolen items from a home on North Kight Drive Tuesday evening. The items were part of a multi-county entering auto spree. Quintavious L. Gray, 21, was arrested in connection to the thefts. (Photo By: Melanie Ruberti | Daily News)

Tecory Daniels, 27, Dorothy Lawrence, 43 and Tyrone Gray, 23, all of LaGrange, were taken into custody on Wednesday, said TCSO officials.

Daniels, Lawrence and Gray were each charged with one count of felony theft by receiving a stolen weapon and booked into the Troup County Jail.

A fourth suspect, Quintavious L. Gray, 21, was taken into custody on Tuesday after TCSO investigators served a search warrant on his home off North Kight Drive.

All of the items were reportedly stolen by Gray and his accomplices over a span of six months, Caldwell stated.

Capt. Caldwell estimated the agency seized around $75,000 worth of items from Gray’s home.

All four suspects will also face charges in other jurisdictions where they allegedly committed crimes.

A silent alarm helped LaGrange Police catch a man attempting to break into an ATM in front of the Charterbank at 300 Church Street about 1:15 a.m. on Thursday.

A LPD officer managed to capture the suspect trying to pry the machine open on his mounted patrol camera, the report stated. The man then spotted the patrol car and took off running down Church Street.

Officers caught up with the suspect in the rear parking lot of the First Baptist Church on the Square, according to the report.

The suspect, identified as Randal Lee Cofield, 31, had a metal crow bar and a box cutter on his person, stated the report.

Cofield allegedly told police he was dropped off in front of the ATM machine by several males in a Nissan car and told to break into it. The men reportedly told Cofield if he did not do it, they would kill his mother, according to the police report.

When asked why the men were after him, Cofield allegedly told police he stole more than $4,000 worth of dope from them, the report stated.

The 31-year-old man was arrested and charged with I transported him to the Troup County Jail where he was charged with criminal attempt-theft by taking, criminal damage to a business, possession of tools for the commission of a crime and obstruction of a police officer.

Cofield was unable to steal any money out of the ATM, but did considerable damage to the machine, LPD police said.

A LaGrange police officer discovered on Thursday someone damaged and stole items from a vacant home in the 200 block of East Yorktown Drive.

The officer learned the home belonged to someone who was deceased but remained occupied by an acquaintance up until October, the report stated.

The alleged suspect(s) stole a refrigerator plus numerous water and lighting fixtures throughout the home, according to the report.

The cost of the theft and damages was estimated around $1,750.

A man claimed someone broke into his 2008 Ford F-150 truck while it was parked at Longhorn Steakhouse at 1518 Lafayette Parkway on Tuesday.

The man told LaGrange Police the suspect(s) stole an HP “Z Book,” an iPhone and a gold Citizen watch, plus a computer bag containing work and personal documents.