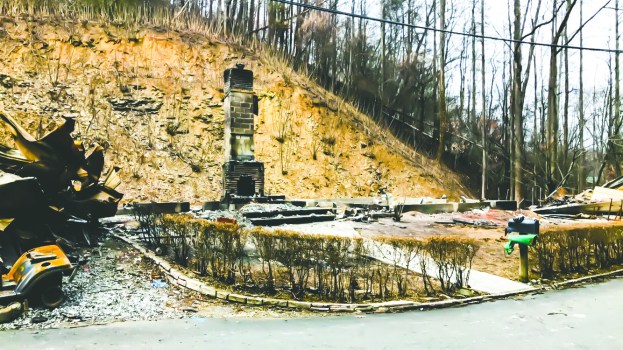 Homes and businesses were reduced to ash and rubble, said volunteers from ThreeLife Church. (Photo: Submitted) Cutline TN Wildfire 4: Lindsay Johnson, (second from left), a member of ThreeLife Church, stands with other volunteers in Gatlinburg, Tennessee. Johnson was one of 15 people from ThreeLife that helped wildfire victims recover what little items were left from their homes. The group spent four days in Tennessee. (Photo: Submitted) 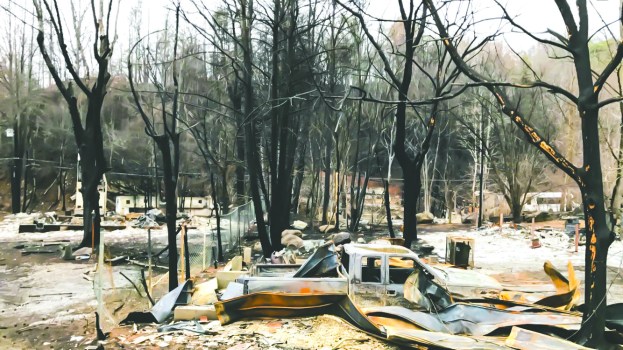 Entire streets and neighborhoods were left barren after the wildfires tore through Gatlinburg and Pidgeon Forge, Tennessee. (Photo: Submitted) 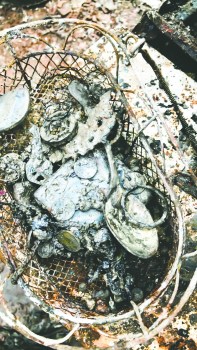 Volunteers with ThreeLife Church spent hours sifting through ash and rubble to help wildfire victims find personal items from what was left of their homes. The group mainly found metal objects including spoons, keys, change and even a homeowner’s ring. (Photo: Submitted)

LaGRANGE – Images and tales of survival from victims of the Tennessee wildfires continue to haunt some members of ThreeLife Church.

The team returned from Gatlinburg and Pidgeon Forge, Tennessee on Thursday after they served as volunteers helping with the clean-up effort.

The sight and smell of the wildfires assaulted their senses immediately. Though it was raining, church members said the air was still thick with smoke. Entire neighborhoods, churches and businesses were reduced to rubble.

“You could see a row of eight homes burned to the ground, but then one was still standing,” said ThreeLife Pastor Josh Rhye.

“All the homes were literally burned down to their foundations … there was nothing left,” added Jon Longshore, church production manager and volunteer.

The mission trip hit home for volunteer Lindsay Johnson. She would often travel to Gatlinburg for family vacations.

Now, Johnson barely recognizes the town or surrounding mountains she once played in as a child.

“The adventurous trails you once imagined would lead you to some beautiful “secret spot” in the mountain’s core no longer exist. The landscape … is now charred and blackened trees … are all that’s left,” she said.  “The impact of the fires started to settle in when I saw the burned Gatlinburg Welcome Center sign. This was more than a forest fire. This was a city. These were people’s lives … Right there in the middle of town homes, business, and churches, were gone …”

Sifting through the ashes

The 15 member ThreeLife mission team partnered with two other churches, plus the Samaritan’s Purse organization and immediately got to work.

The groups sifted through the ash and rubble of houses, helping homeowners find any remaining valuables not destroyed in the wildfire.

“One day our volunteers spent eight – 10 hours sifting through ash to find a ring with the homeowner’s initials on it,” said Longshore. “After all that time, they found it and it made his (homeowner’s) day.”

“… One gentleman was on site, at his own property where his house once stood and explained to us that he had to leave to ‘get back to work,’” Johnson said. “He was helping others restore normalcy in their lives when he, himself had just lost all he owned to the fires. It was so incredible to witness that community being so selfless to make sure others were cared for. Those folks are truly portraying the heart of Christ through this unimaginable tragedy.”

Stories of survival; tales of tragedy

The stories of survival and tales of horror also compelled the team to help as many victims as possible.

“One man said the winds were blowing around 80 miles per hour. So when the wildfires came over the Smoky Mountains towards Gatlinburg, he said it felt like a blow torch,” Rhye remembered.

A hotel owner told the volunteers no evacuation order had been given when the fires swept down the mountain. He, his family and several exchange students who live in the hotel were stuck in grid lock traffic as the flames crept closer to town.

“The police said just find an empty parking lot and get in the middle of it,” the man stated via videotape.

The man, his wife and all the exchange students survived the swirling inferno, Rhye said.

So did his hotel. He immediately opened it up to folks who lost everything – free of charge, stated Rhye.

But not everyone the ThreeLife volunteers met were so fortunate.

“One man told us his daughter called him while he was shopping in town and said their house was on fire and there was no way out,” Longshore sadly recounted. “He lost his wife and two daughters in the wildfires.”

“A man named Scott said he looked outside and saw his neighbor’s house on fire,” Rhye said. “He managed to grab a bag of clothing, but didn’t have time to look for his pets … he said he left the front door open in hopes they would be able to escape.”

The fast moving fire burned the man’s home down to the foundation, Rhye stated.

ThreeLife volunteers also visited a massive distribution center in Pidgeon Forge, Tennessee where the earlier in the week a 53-foot tractor trailer delivered supplies collected from Troup County and the surrounding area. The project was simply named, “Operation Tennessee.”

“There were tears running down their (victims) faces in true thankfulness,” Rhye said. “One guy had on shoes with pink shoelaces but he was so very thankful for them.”

Rhye said several communities, including LaGrange, collected more than 100,000 pounds of toiletries and supplies. The items were packed in boxes and filled four massive big rigs.

“The most amazing part of that story was watching this community (Troup County) come together as a united front, to provide for another community, 300 miles away,” Johnson explained. “It was no longer a “ThreeLife Church thing”. It was ‘THE’ church, as one cohesive unit, fused together to produce an outcome that allows only God to receive the credit (for it).”

The volunteers also armed themselves with gift cards. They were able to give $1,000 to a single mom with children who lost everything in the wildfires.

The group also gave $1,500 to the hotel owner so he could continue allowing victims a free place to stay, Rhye added.

ThreeLife Church plans to stay in touch with the distribution center in Pidgeon Forge and collect more supplies as needed, said Rhye.

All three volunteers said they plan to return to Tennessee within the next few months to again help those in need.

“…When we take on the responsibility to love on other cities and states, God blesses that,” said Rhye. “… never hesitate to do your part whether it’s a small or big donation. It takes every single one of us … It doesn’t matter who gets the credit. Let’s come together as a community and meet the need – whatever it is.”